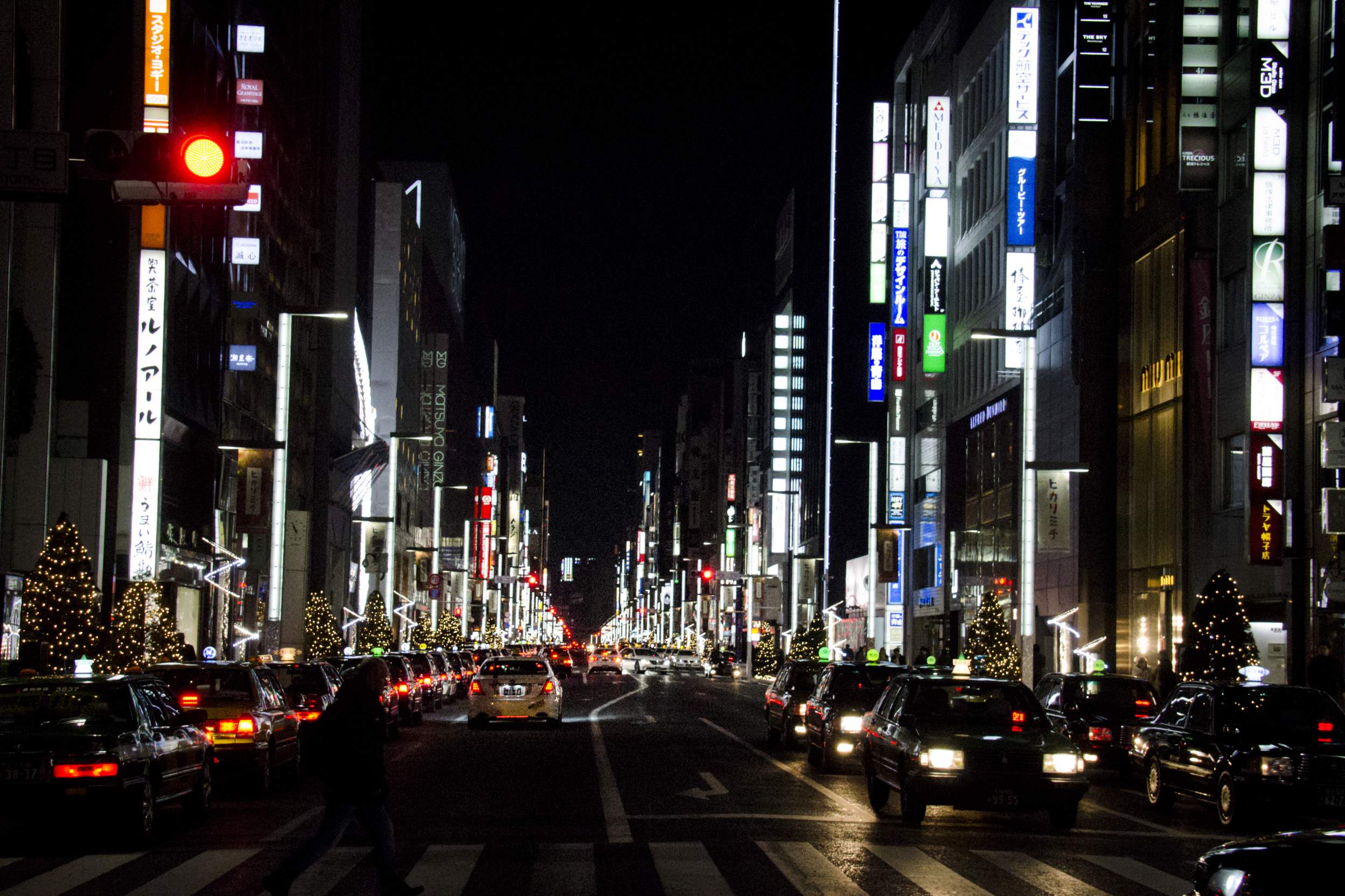 What to Do in One Week in Tokyo: Ginza

Japan may be well-known for its history in World War II but it is also renowned for having the oldest monarchy in the world dating from the 6th century B.C. And for tourists, its capital is famous for its highly advanced technologies and mouth-watering sushi and ramen. Here are some  of the things to do when you have 48 hours in Tokyo.

Greater Tokyo Area — consisting of Tokyo Metropolis and the neighboring areas of Saitama, Chiba, and Kanagawa — is the world’s most populous urban area. With a population of 37.8 million and a land area of 3,300 square miles, it surpassed New York (Tokyo’s sister city since 1960) in the 1950s, which had held the title for three decades. It is the prime driver of Japan’s whopping $4.2 trillion economy, the third in the world, after geographical giants United States and China, based on nominal gross domestic product (GDP). The number of people calling it home is approaching one-third of the country’s total population.

By the way, if you want to know more about Tokyo, head over to Pages of Travel and read their “Complete Itinerary for 5 days in Tokyo”!

Anybody who wants to visit Tokyo will want to include the two Cs in their plan ahead of time: cash and means of communication. ATMs at Japan’s airports refuse cards from outside Japan. Tip: Go to a 7-Eleven branch; they have cash machines that will accept your card. NTT Docomo offers visitors a SIM card with one gigabyte of data for 14 days, but not all phones are compatible with their networks.

Here are some of  the things to do in Tokyo

48 Hours in Tokyo – Morning in Tokyo

The spots most visited by tourists are in the following neighborhoods: Shibuya, Ginza, Roppongi, Asakusa, Akihabara and Harajuku. Start your first morning in Tokyo at the famous Shibuya Crossing. It is right in front of the Shibuya Subway Station and it is the world’s busiest pedestrian crossing. Millions of pedestrians flood into this intersection every day from and to all directions, a number of them leaving your eyesight in just a couple of blinks.

The importance of Shibuya Crossing in the business, entertainment, and tourism industries of Japan — as well as its impact in culture and fashion — cannot be underestimated. It is Japan’s equivalent of New York’s Times Square, with giant television screens, huge billboards, and neon lights perched on buildings and fixed on walls alluring you with flashy images and imposing texts blocks after blocks, although there are many other sites of such kind in certain cities in the country. The use of your feet in this furiously fast and crowded crossing is an insatiable invitation — both by stimulating commercial advertisements and actual — to all the auditory, visual, emotional, gastronomical, vanity, and other mundane products and services that this dense district’s establishments of all sorts have to offer, and perhaps even more.

Note: On top of that, if you want to know where to stay in Tokyo, check out You Could Travel’s guide to neighborhoods and hotels!

True to its reputation, this intersection has appeared in blockbuster movies like Lost in Translation and The Fast and the Furious: Tokyo Drift, and its image always captured by photographers and the media in general to describe Tokyo itself.

Some of the things to do in Tokyo are as follows. Order a coffee at the Starbucks branch located on one side of the intersection and walk up to the second floor. It is an excellent location from which to observe the stupendous action.

After you have witnessed the inundation of humanity at the Shibuya Crossing, you will want to spend the rest of your first day visiting memorable places that can also offer you priceless experience in the city. Walking around Shibuya is an experience in itself, no matter at what time during the day.

48 Hours in Tokyo – Lunch in Tokyo

Lunch is the most interesting thing on the things to do in Tokyo list. Food in Tokyo is a serious business, and the options are almost endless. There are nearly 100,000 restaurants around the city. Michelin Guide’s former editorial director Jean-Luc Naret labeled Tokyo as “by far the world’s capital of gastronomy.” So the question for a visitor of where to eat out is often a matter for serious debates.

The most famous dishes, sushi and ramen, are excellent options. These two dishes are very special and they deserve articles of their own. Ramen shops are unique in the world and merit the attention they are getting lately.

Another excellent restaurant is Tempura Tsunahachi. Here’s another classic Japanese dish: tempura, battered and deep-fried seafood or vegetables. This restaurant is one of the best known and busiest in Shinjuku. Please note that there is usually a queue and people taking pictures on the premises are not welcome.

Other things to do in Tokyo. After lunch choose between the 634-meter Tokyo Skytree and the Tokyo Metropolitan Government Building observatories. Both are notable places in the city and provide impressive views of the skyline.

Tokyo Skytree is the tallest tower and the second tallest structure in the world. It was opened in 2012, and its observatory is perched at a height of 450 meters. A visit at Tokyo Skytree costs around $26.

If you are on a tight budget, however, or you simply want to save money for gadgets and souvenirs, sight-seeing at the building 1 of the Tokyo metropolitan government is the right fit for you. It is regularly open from 9:30 a.m. to 5:30 p.m. It is in the Shinjuku district, which means that you’ll still be within walking distance from comfortable restaurants for dinner.

Another option for dinner would be Izakaya Sanzo at JR station Ueno. This is a rather ordinary restaurant, and that’s the reason why it’s included in this list. There’s nothing like having the full local experience. It is a small traditional izakaya, located in a basement. Here, business people eat delicious and cheap bites; beer, sake and shochu+hoppy (a popular combination in Tokyo) are consumed in large quantities; patrons chain-smoke cigarettes and talk loudly.

A slice of raw beef with your beer?

Restaurant Hayama in the Ginza neighborhood is another delicious option. This restaurant manipulates Wagyu beef the same way traditional Japanese restaurants prepare fish. It’s an experience on its own!

Wake up very early the next morning thinking about things to do in Tokyo.  Visit Tsukiji Fish Market, the world’s largest, selling well over $15 million worth of sea products daily. The city’s tuna auctions are one of the most cliché tourist activities in the city. Registration starts at 4:00 a.m. at the fish information center (Osakana Fukyu Center) at the Kachidoki Gate and auctions start at 5:00 a.m. Take a taxi to get there as trains are yet to resume operations at this time in the morning. Conclude your trip to Tsukiji by filling your empty stomach with breakfast at Daiwa Sushi or Sushi Dai. They are just around the corner!

Japan is the oldest monarchy in the world (since the 660 B.C.) and all of its emperors were from the same family. A trip to Japan is incomplete without a visit to the Imperial Palace, the main residence of one of the world’s most private royal families. It is a large park-line complex ensconced in its own serene garden and tranquil pond. The Japanese have a high respect for their emperor, and emperors have ruled over the country for over 15 centuries, although largely in a ceremonial capacity. The palace was destroyed during World War II and was rebuilt. The place is closed on Mondays and Fridays.

If you haven’t had your fill of sushi yet, for lunch, you will want to visit Uohgashi Nihonichi Shimbashi Hibiyaguchi at the ground floor of the JR Station Shimbashi. At lunch, sushi is often consumed in small restaurants where patrons order, then eat while standing at the bar. The English name is usually written on the signage of this restaurant, “Standing Sushi Bar.” This type of restaurant is available all over Tokyo, but the Shimbashi address is one of the most famous.

Another place to consider is Restaurant Makimura near the Omorikaigan Metro Station. People with a few extra dollars to spend should take a reservation in this traditional Japanese restaurant, holder of three Michelin stars. The experience here is well worth it.