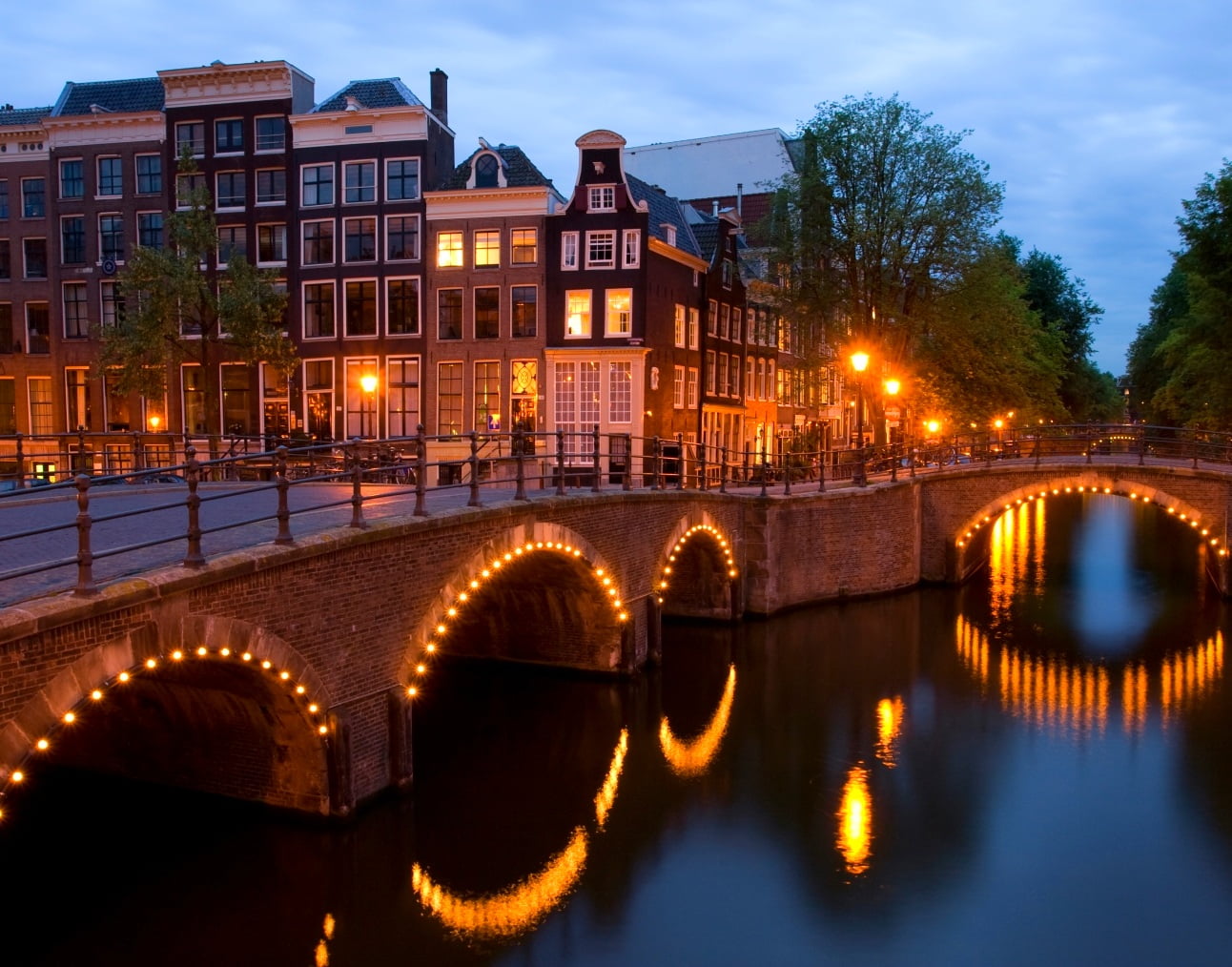 Amsterdam - This is a copyright-free photo
Home
Destination Guides
AMSTERDAM

Amsterdam Travel Blog: Where, How?
Amsterdam on C&C
Best Time To Visit Amsterdam
Personal Notes
Where to Stay
Let’s Eat!
Let’s Go For A Drink
What To See And Do
Tipping in Amsterdam
Common Scams & What To Avoid
C&C’s Google Map of the City

Amsterdam Travel Blog: Where, How?

Airport Notes: This is one of the most important airports in Europe. It’s safe, modern, comfortable and beautifully designed. There’s a mobile app to help you get to your gate and find all you need. Distances between gates are reasonable.
It’s the hub for KLM,  Corendon Dutch Airlines, Martinair, Transavia and TUI Airlines Netherlands. Other majors like Delta Air Lines, Jet Airways, EasyJet and Vueling fly to-and-from this airport.
Transportation to-and-from the airport: The easiest way to get downtown from the airport is to take the train that’s directly underneath the passenger terminal complex, direction Amsterdam Centraal. Note that the airport station is also a stop for Thalys high-speed trains. There are directs from the airport to Paris, Utrecht, The Hague, Rotterdam, Antwerp, Brussels, Lille and many more.

Amsterdam is a small city. Pretty much everything is within walking distance of the main train station.
The most used mode of transportation is the bicycle. There are lot of rules – written and unwritten – about riding bikes in Amsterdam. Before renting a bike and hopping on it, ask about the rules!
There’s an underground metro, autobus network, as well as tramways in the city.
The tram #2 is the touristic line that passes by a lot of the sights in the city.
As in almost anywhere in Europe, you need to buy a ticket outside of the bus/metro/tram and validate it inside.

Metered taxis are expensive but safe and reliable in Amsterdam.

Just like anywhere, Uber is cheaper and safer. If you don’t already have an account, enter invite code 9nyahp when you sign up to get free rides!

Navigation Tips: The easiest way to navigate the city is to take the main train station as the point of reference. It’s located at the northernmost point of the city (if we exclude “North Amsterdam”) and is at the very end of Amsterdam’s main street, Damrak (which, confusingly, changes names many times throughout the city. Damrak becomes Rokin, then, Vijzelstraat, then Vijzelgracht, and ends where the “Heineken Experience” building is located.)

Note that the city’s streets are built along the famous canals and that they are not built on a 90-degree angle. Furthermore, the names of the streets are extremely long, making them difficult to remember. The suffix “-straat” means “street”, and the suffix “-gracht” means canal; knowing both can save you a lot of trouble.

Always – Always! – look on both sides of the street before stepping onto a bike path or a street. Bikes are silent and locals ride very fast!

More About Amsterdam on C&C:

Amsterdam is not only the capital of the Netherlands, it’s also the capital of coffeeshops – the ones that sell weed and hash, not coffee. A lot of people go there to do what’s called “drug tourism”.

It’s also the place where half-naked prostitutes stand in front of windows with a red-light shining above their heads waiting for clients.

Both prostitution and soft drugs are legal in Amsterdam, though there are strict rules in place: it’s not legal to smoke weed outside of the coffeeshops, and the coffee shops don’t sell alcohol. If you get caught smoking outside, you’ll be in deep trouble. Furthermore, prostitution is only legal with the ladies in the windows, not the ones that roam the streets.

In Amsterdam (as with everywhere in Europe), watch out for pickpockets. You have been warned.

Every time I went to Amsterdam, the city had a different feel to it. Sometimes, the Red Light District is dirty and seedy, with obvious illicit activity buzzing everywhere; sometimes it’s clean and proper, with a heavy police presence.

On the weekends, all of the old town is full of tourists from neighboring England, Belgium, Germany, Denmark, and, well, most of Europe. There are a lot of bachelor and bachelorette parties in Amsterdam each week! It’s truly a party town, however, the partying is very much confined to the Old Town, as the rest of the city likes it quiet.

Amsterdam is also the hometown of both Heineken and Grolsch, two beers that are world famous. Heineken has some interactive digital museum called the “Heineken Experience”. It’s tacky and a bit stupid, but hey, for a lot of people, it’s a must-stop!

It would be a shame to limit Amsterdam to prostitution and weed. There are so many great things to do in Amsterdam! It is a spectacularly beautiful city, the architecture is stunning, the Vondelpark is a very nice place to go and relax in the summer, and there are dozens of sights that are not linked with sin.

Amsterdam Travel Blog: Where To Stay

There are hundreds upon hundreds of dorms in Amsterdam. Almost every single coffeeshop has beds upstairs! Most of them are disgustingly dirty and quite unsafe. If you do get a bed in a dorm in the Red Light District, get your own padlock, and make sure the hinges of your locker are not loose or easy to unscrew!

The most famous hostels in Amsterdam are The Bulldog and The Flying Pig (there are 2 of them, uptown and downtown). Most of the big hostel chains are present in the city, including St. Christopher’s Inn and HI.

My suggestion: get out of the Old Centre! Hotels near the Vondelpark or just west of Damrak/Rokin, in the smaller streets past the Anne Frank Huis, offer a great compromise of location and tranquility.

All of the major hotel chains are in Amsterdam. Just pick your favourite!

Our Suggestions – Dishes and Restaurants:

Listen, for me personally, there’s a mandatory stop each time I’m in Amsterdam: I need to go get some fries at either Manneken Pis fries (Damrak 41) or at Vlaams Friteshuis Vleminckx (Voetboogstraat 33). I truly think these are the best fries in the world. They’re served in a paper cone and completely covered in mayonnaise or another sauce of your choice.

One of my heroes when I was a kid was Gaston Lagaffe, and he ate herring sandwiches that stunk up the office and pissed off Fantasio. And each time I’m in Amsterdam, I get a sandwich, just to be like Gaston.

It’s a bit of a cliché tourist spot, and it’s clearly overpriced, but I really like going to Hoofdstad Brasserie (Nieuwe Doelenstraat 2-14) just because of the beautiful terrasse on the canal. It’s a very nice place to sit and watch the world go by in the summertime.

Indonesia used to be a colony of the Netherlands and the two countries are still quite linked. That’s why Amsterdam is a great spot for an Indonesian meal! For that, try Sari Cita.

Heineken – This is a copyright-free photo

Amsterdam Travel Blog – What Do the Locals Drink?

Beer! And Genever, the ancestor of gin.

Drinking in public is forbidden in Amsterdam.

Our Suggestions – Bars and Restaurants

There are thousands upon thousands of wonderful late-night options in Amsterdam, and not just for a drink. I’d suggest you find places that are a bit outside of the Old Centre if you want to meet locals!

The Greenhouse Effect (Warmoesstraat 55) is a coffee shop, bar and hostel all under one (well, factually, two) roof. It’s a little bit of an emotional place for me and I return whenever I’m in town. My favourite thing about this place is that, if you’re lucky enough to grab the table that’s in front of the window, you get to sit down and watch the world go by on Amsterdam’s oldest street, Warmoesstraat. At night, things can get wild out there!

Barco (Oosterdokskade 10) is a bar on a boat! It’s a tiny bar right on the canal that sometimes offers live music. It’s worth a stop, just for the experience and to take a look at that one-of-a-kind place.

Café de Dokter (Rozenboomsteeg 4) is a very, very small bar and one of the oldest in town. It’s been slinging cocktails since 1798!

Café Soundgarden (Marnixstraat 164-166) is just my kind of place. Outside of the touristy parts of town, a beautiful terrasse on the canal, 90’s rock music, a crowd made of 99% locals, reasonable prices…

As regular readers of this column know, I don’t know anything about clubs (or, in the case of Amsterdam, strip clubs or sex shows or anything like that.) Sorry!

The canals of Amsterdam – This is a copyright-free photo

Amsterdam Travel Blog: What To See And Do

Fans of Jacques Brel will obviously want to go visit the port. It’s a bit of a tourist trap and there’s not much to see, though there is a museum.

Rent a bike and see the city like the locals do. But don’t get in their way! And make sure you know the (both written and unwritten) rules of riding a bike in Amsterdam!

I’ve personally enjoyed my time at the Amsterdam Museum. It relates the history of the city. Did you know that the whole city had to be dug up because it’s located in a swamp? Hence the numerous canals.

Boat cruises along the canals are very popular with tourists. There are dozens of different operations available.

Amsterdam’s Tulip Festival – and general flower-seeing (is that a word?) – is a destination in itself!

Amsterdam Central Station – This is a copyright-free photo

Just like in most of Europe, tipping isn’t expected, however a 7% to 10% tip, or simply rounding up the bill and leave change, is a nice gesture. That’s true for restaurants, hairdressers and taxis.

In the Red Light District, there is a block of successive tiny back alleys with prostitutes and headshops everywhere. One of these streets is called Trompettersteeg, which is the narrowest street in the city. I have seen criminal gangs operate on such streets. My personal experience has been the following: a group of very large men creates traffic in the narrow street, keeping people from passing through; another group of men who are the partners of the first group come from behind and keep the people trapped; the trapped people are then forced to pass in one direction, between two large men, who take whatever is in the back pockets of the unfortunate passers-by.

There are a lot of drug dealers outside in the streets offering illegal drugs.

I have witnessed child prostitution on the streets of Amsterdam.

Do not try to take pictures of the prostitutes. Seriously, don’t.

Some tourists in Amsterdam behave horribly and are sometimes an annoyance, sometimes a real nuisance. Don’t be the ubiquitous loud-mouthed drunk and stoned tourist.

Outside the three main Red Light Districts, Amsterdam is one of the safest cities in the world. Indeed the red light areas have been created to focus “sin” in specific parts of the city to rid the rest of the city from it. And it’s worked.