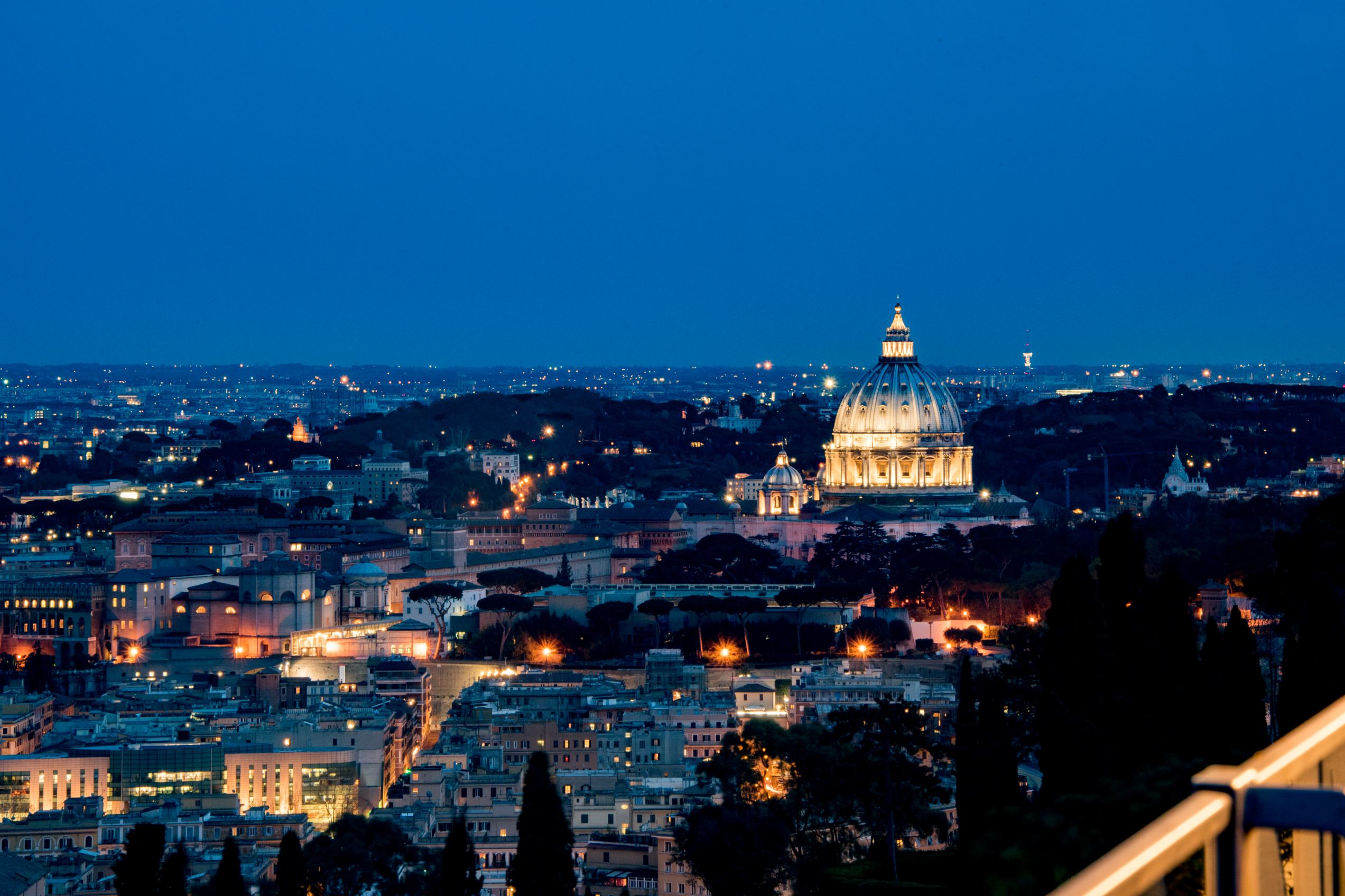 Where, How?
Rome on C&C
Best Time To Visit Rome
Personal Notes
Where to Sleep
Let’s Eat!
Let’s Go For a Drink
What to See and Do
Tipping in Rome
Common Scams & What to Avoid
C&C’s Google Map of the City

Things to Do in Rome: Where, How?

Airport Notes: Fiumicino is Rome’s main airport. It is big, modern and pretty efficient. Also, it is sixth in Europe in regards to traffic volume and first in Italy. The airport has 3 passenger stations/terminals and offers a variety of services. Terminal A caters to domestic flights, Terminal B domestic and international flights and Terminal C transatlantic flights.

Ciampino is Rome’s secondary airport. Most budget airlines fly there. It’s not as clean and modern as Fiumicino.

Transportation to-and-from the airport: Fiumicino airport is linked to the city by train and road. It is well-connected to the city by public transport options. Private transportation alternatives include the white Roman taxis or a chauffeured private car that has to be booked in advance. The Terravision bus is probably the cheapest and easiest way to get to the city. The public bus stop at the airport is found at ground level underneath Terminal 1.

Ciampino isn’t as well connected. In order to get to the main train station (Termini), you need to take a bus outside of the airport and then take the metro at Cinecitta station. There’s also a cheap shuttle that will take you straight to Termini, however you’re subject to Rome’s terrible traffic.

Driving yourself is not worth the hustle. The most expensive way to get around is by taxi but it is by far the fastest and most convenient. In the city center, you are better off on foot. Public transport options include buses, trams, trolleybuses, the Metro network and the Roma-Lido, Roma-Viterbo, Roma-Giardinetti light railways. Buses are reliable and the best way to get around after on foot.

A Note on Taxis: Rome’s taxi drivers are rude, aggressive and will make you go around in circles. Then, if you tell them they’re not taking the right route, they’ll get in a shouting match with you. Welcome to Rome!

Vatican City is the home to endless sights, relics and the Vatican museums. In the Modern Centre, there are several restaurants as well as shopping and dining options. Collosseo is the heart of ancient Rome where the Colosseum, the Imperial Fora and the Capitoline hill are found. Old Rome on the other hand is the Renaissance-era centre of the city and is recognizable by its piazzas, cathedrals and beautiful squares. In the Northern Center are the Spanish Steps and Villa Borghese.

Navigation tips: There’s no easy way to navigate Rome. Remembering where the Tibre is, the river that runs through the city, can be useful, though it’s not straight at all and can mislead you. Have your smartphone with you at all times.

What to do in Rome in 3 days-Rome Travel Blog: Historical Rome: The Coliseum – Photo © Cedric Lizotte

Things to Do in Rome: Personal Notes

Rome is the capital of Italy and it’s one of the cities with the most history in the world. You will see this everywhere in the Centro Storico – the historical center. There are ruins and old buildings everywhere. There are absolutely stunning places, squares and fountains. Pretty much everything is filled with history in the historical center. Once you’re done with the historical center and everything historical about this place, then right outside of this center you’ll also find real life. Real life in Rome means street food, trattorias, and a bunch of old people just hanging outside having a grappa or playing bocce. It’s a very different way of life outside of the center than it is on the inside.

Well once you’re done with the sites, go hang out in neighborhoods like Garbatella, Testaccio and Trastevere to see how Romans actually live. Garbatella and Testaccio are especially full of spectacular restaurants. Do not stay in the historical center when you want to eat in Rome. That would be a terrible mistake. There’s also the Vatican which is, of course, extremely touristy. But as soon as you step behind north-west of the Vatican, you’re in the Monte Mario region. It is another spectacular place built on a hill and there you can find different points of view to see the city from up above. There are a lot of very expensive hotels and houses. The sights in general over there are also very interesting.

I love Rome, I visit it quite often. One of my favorite activities is to grab a six pack of Peronis and head to Piazza Trilussa. This is basically where the local kids hang out on Friday and Saturday nights. They go there to just have a few beers. It’s on a small square right on the river with your back to the Trastevere neighborhood. Tare plenty of young people there just hanging out with a beer in their hands because, of course, drinking in public is legal in Rome. If I only have one story to tell about Italy, it must be the time I visited La Pergola, the three Michelin star restaurant held by Heinz Beck. La Pergola is in one of the most celebrated and popular hotels in Italy, Roma Cavalieri, Waldorf Astoria hotel. Not only did I get to eat at the restaurant, but I also got to meet Chef Beck for a quick interview.

What to do in Rome in 3 days-Rome Travel Blog: La Pergola, Rome – Cedric Lizotte with chef Heinz Beck

Rome Travel Blog: What to do in Rome in 3 days

Each of Rome’s rionis has a unique feel and price for staying in them. It is therefore important to identifying each’s defining characteristics. If you are in a hurry and don’t want to waste much time on searching what to do in Rome in 3 days, go here straight.

Centro Storico is the place to stay if you are in Rome for a short while and you want to see all of the city’s main sites. It’s also the spot where tourist traps, horrible restaurants and ultra-expensive hotels abound.

If something classy and centrally-located is what you are looking for and you don’t mind splurging, try the Tridente neighborhood. La Controra Guesthouse Roma is a more affordable alternative in this area.

Dreaming Rome is another great hostel that I recommend.

Jewish Ghetto is also centrally-located with great dining options. It is in close proximity to Piazza Navona but away from the crowds.

Alpi Hotel, Welcome Piram Hotel and Augusta Lucilla Palace are my favourite mid-range and four-star hotels that are located at the heart of Rome.

There are far too many options on what to do in Rome in 3 days. All you have to do is keep eyes and ears open.

With all that being said, Trastavere is the city’s most charming neighborhood. Get an AirBnb there. Or in Testaccio! That’s my personal choice!

What to do in Rome in 3 days-Rome Travel Blog: Assaje Restaurant in Rome – Fresh buratta pasta

I’ve already written an article of my favourite places to eat in Rome.

And if I were to pick only one, it’d be Al Ristoro degli Angeli.

There are hundreds of wonderful, spectacular, great, stunning restaurants in the Italian capital. But there are a lot of spectacular tourist traps. And so my #1 tip for everyone reading this guide is the following: DO NOT EAT IN THE HISTORICAL CENTRE OF ROME. Step out! Go away! Don’t get caught in the tourist trap web of this city!

Don’t look for what to do in Rome in 3 days far away from a good restaurant and dining options.

All of my absolute favourite are in the article above. Still, here are a few more great addresses.

What to do in Rome in 3 days-Rome Travel Blog: Trajan’s Market Rome – CC0 / Public Domain

It is illegal to drink in public after 10pm in all districts except Ottavia.

Rome’s nightlife has a lot to offer so don’t spend all your money in the museums. Once the guards retreat back to their homes, it is time to switch your itinerary and prowl the ruins.  When you decide on what to do in Rome in 3 days, keep in mind the bar and beverage options available.

Enoteche are wine bars that serve quality drinks that go well with chill conversation. They are mostly found in Centro Storico and the Ancient City. Trastevere, Corsi and Termini are littered with Irish pubs and American-style bars.

Piazza di Spagna is home to a couple of upscale lounges but if you are looking for a full-swing rave, head over to Testaccio’s discos.

What to do in Rome in 3 days-Rome Travel Blog: Pantheon Rome – CC0 / Public Domain

Rome Travel Blog: What to See and Do

Here’s a complete article detailing all of the most important historical destinations in the city.

Take a walk back in time as you walk through and admire the ancient ruins of the Roman Forum.

Visit the Colloseum, Rome’s most recognized symbol and learn about its lengthy and bloody history.

Gaze at the architectural beauty that is the Pantheon where Rome’s kings were once buried.

Get to see the city’s baroque art in full display at the splendid oval-shaped Piazza Navona.

Spend your day exploring the Vatican and its museums and not forgetting the St. Peter’s Basilica.

St. Peter’s Basilica is a pilgrimage site for those of the Catholic faith though non-believers stop to marvel at its architecture too.

Climb the famous Spanish Steps in the Piazza di Spagna that lead to the Trinità dei Monti.

If you are up to it, climb to the top of Villa Medici to get phenomenal views of Centro Storico.

A trip to Rome is incomplete without a visit to the Trevi Fountain and throwing a coin in it. Don’t look for what to do in Rome in 3 days too far away from a happening tourist attraction.

Just like in most of Europe, it is not expected to tip. If the service was exceptional then you can tip a small amount. This is the case for restaurants and taxis.

Most of the European common scams can be found in Rome. This means that if someone approaches you with a ‘gift’, do not accept it. They will be asking for money and be very invasive about it. Do not follow someone blindly because there are parts of Rome that are basically a maze and you will get lost quite quickly. Also, the whole touristic area of the central part of the city is a gigantic tourist trap. Do not buy food, drinks, or anything there. Go see the sites and get out.

Don’t look for what to do in Rome in 3 days in such places.

There are not a lot of violent crime but muggings do happen. Which means you need to be aware of your surroundings at all times.

Taxis are pretty bad. They are scammers and, like Italians, if you argue they will argue back. This is how they are. If you do take a taxi, avoid the center of town at all costs. They will pretend that there is traffic somewhere when there’s not and make you go a long way around until you finally get to your destination. Even if you use your GPS and show the guy he’s wrong, you’ll for sure start an argument. Unless you’re prepared to get into a shouting match with an Italian taxi driver, avoid taxis in Rome.