Day Trips from Lisbon And Around: Day Trips

The capital of Portugal itself is a wonderful destination, with plenty to discover and explore. But every once in a while, one of the best things to see in Lisbon, is to get out of the city! The towns around Lisbon offer plenty of reasons to do so. From the spectacular beaches of Cascais to the historical town of Sintra and the hidden beauties of Queluz, there is plenty to go see outside of the main city!

Here are my favourite spots around Lisbon. And don’t forget your sun block…

Day Trips from Lisbon: Cascais and its beaches

Let’s start with Cascais and its spectacular, wind-swept beaches. But it wasn’t always the carefree resort that it has now become; following in the footsteps of King Luis II, who brought the royal family to Cascais in summertime, many other royal families opted to stay there as well during World War II despite the fact that Portugal had chosen to remain neutral in the war. At one point, Cascais developed the same reputation as Monte Carlo and Marbella did, as a playground for the rich and famous.

In Cascais, the best beaches to visit are Santa Marta, Tamariz and Rainha. History buffs can go see the Museu Condes de Castro Guimarães, the Museu do Mar, the old Santa Marta Lighthouse and Museum, or the Palácio de Citadela de Cascais. And art aficionados should definitely visit Casa das Histórias (House of Stories), Paula Rego’s art gallery where her paintings are housed.

Cascais has restaurants that offer mouth-watering seafood entrees, as well as delicious traditional Portuguese fare. Of course, this being a place where the richer people of Lisbon come to play, there are plenty of higher-end restaurants of all kinds.

Best way to get there: In Central Lisbon, you’ll find the Cais do Sodre train, ferry and metro station. To get to Cascais, simply hop on a train—it’s only half an hour away.

Day Trips from Lisbon: Sintra and its history

Sintra is part of the Portuguese Riviera. The Sintra Cultural Landscape is a certified UNESCO World Heritage Site, because of its numerous 19th-century architectural wonders and other historical areas. Included among them is the Castelo dos Mouros (Castle of the Moors), a medieval castle built on top of a hill before the 9th century. The Christians captured it in 1147.

Today, tourists flock to Sintra to visit its many historical sites, including the gardens at the Palácio da Pena (part of the National Park of Sintra). Visitors to the Palácio have described the experience as near mystical. Go and see the unusual architectural structures that give the park a surreal, spiritual atmosphere.

If parks are not your thing, you may want to simply spend time walking around the old town of Sintra. There are plenty beautiful places to explore in the small town, and the hills around town make for pretty and picturesque walks or drives.

Best way to get there: From Rossio station in Lisbon’s city centre, take the train and you’ll get to Sintra in less than 40 minutes.

If it just so happens to be your kind of thing, when you visit the cape, you can get a charming souvenir from the gift shops there.  They offer a handwritten certificate stating that you have indeed visited the westernmost point of Europe.

Best way to get there: Take the train to Sintra from Rossio station in Lisbon, and from Sintra, take the bus to Cabo da Roca. 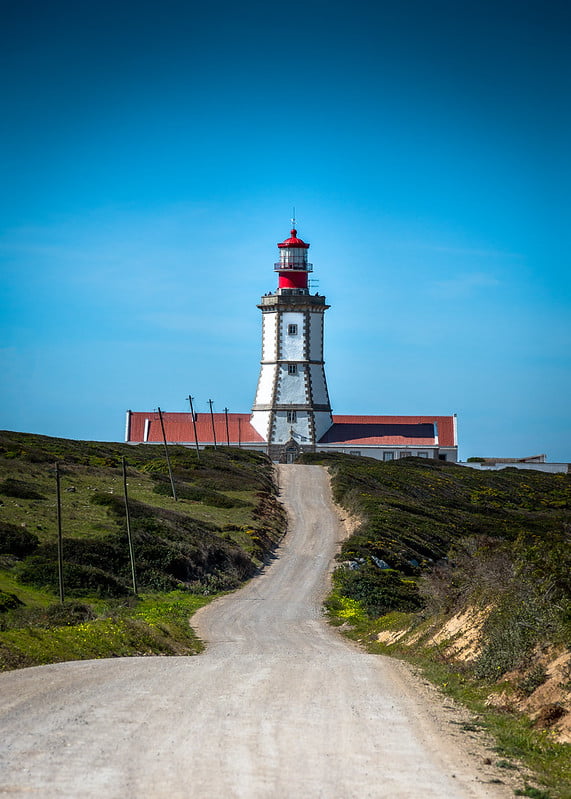 Day Trips from Lisbon: The Farol do Cabo Espichel and its natural beauty

The whole area of Farol do Cabo Espichel is a place of unbelievable natural beauty : the coastline, the landscape, and coastal paths are perfect for hikers. Plus: there are dinosaur prints!

It’s an amazing place to go walking along barren crags and high cliffs on the coast. Cabo Espichel has a lighthouse (farol) built in 1790, on a foundation of an earlier lighthouse from the 15th century. Pilgrims have flocked to Cabo Espichel for centuries, where the Virgin Mary was said to have appeared to fishermen. Another – somewhat ironic – feature that sets Cabo Espichel apart is that there are two sets of distinct dinosaur footprints within its cliffs. The first set, known as the Pedra da Mua, is right beneath the Chapel of Ermida da Memória on the side of the cliff. The lighthouse, the dinosaur prints, the chapel plus a baroque church, Santuario de Nossa Senhora, are the four most important spots in Cabo Espichel.

Best way to get there: Since it’s in a relatively remote coastal area, it’s best to rent a car for your visit to Cabo Espichel.

Day Trips from Lisbon: Queluz, the Versailles of Portugal

In Queluz, you’ll find a Royal Palace, which was built in 1747 for King Pedro and his family. They remained there until they had to flee to Brazil in 1807, when France invaded Portugal.

A visit to the gardens in the palace is definitely one of the worthiest day trips from Lisbon as they are a prime example of harmony between architecture and landscape. The palace itself is a showcase of the favoured neoclassical, baroque and rococo styles of Portuguese royalty in the 18th and 19th centuries.

Best way to get there: Take the train from Lisbon to Queluz (at the Rossio station) and then it’s an easy 15-minute walk to the palace after you get off. There is a bus service directly from Lisbon to the palace but the most visitors prefer the train plus the walk,  since bus station is not easily accessible, and runs less frequently than the train.