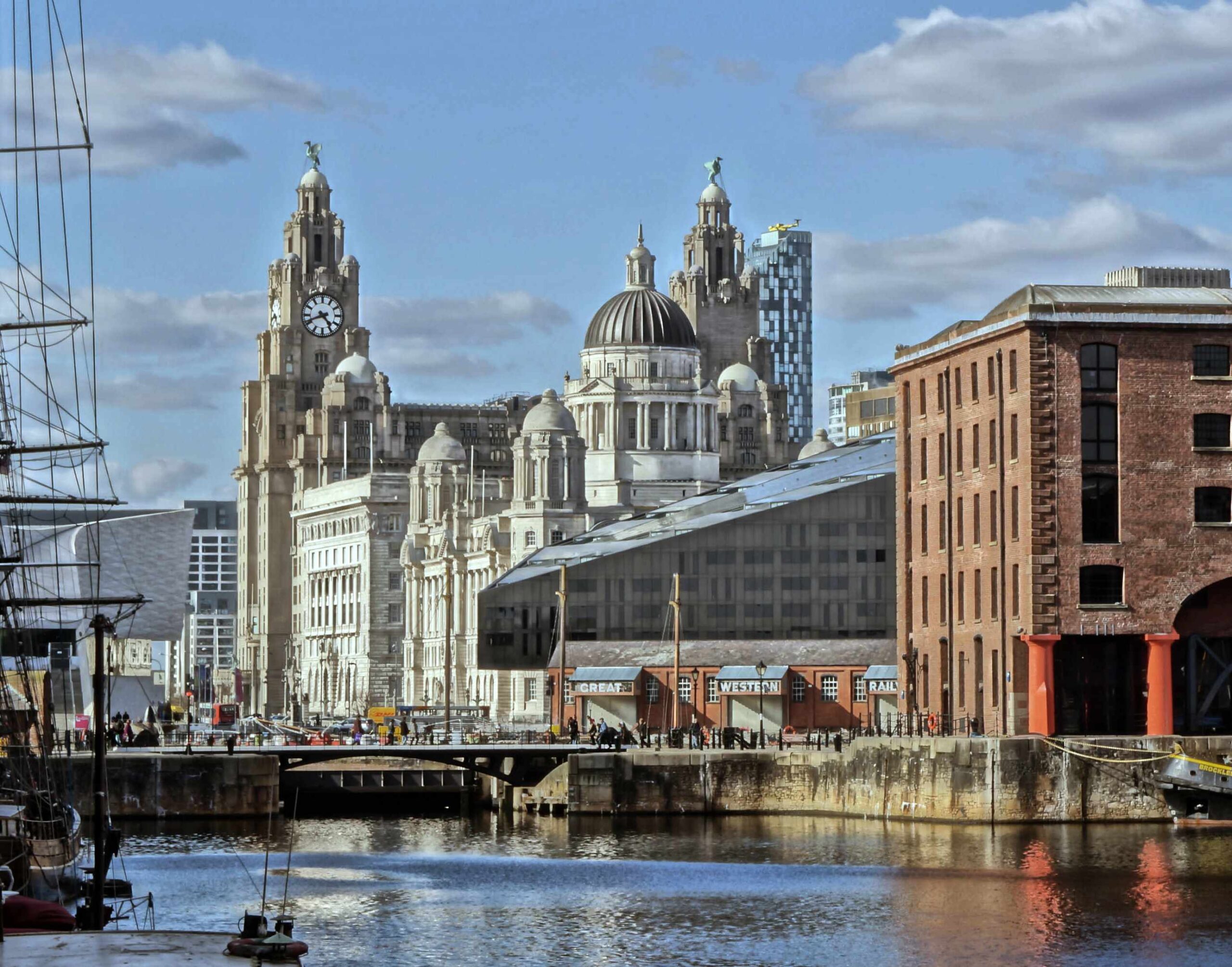 Where, How?
Liverpool on C&C
Best Time To Visit Liverpool
Personal Notes
Where to Stay
Let’s Eat!
Let’s Go For a Drink
What to See and Do
Tipping in Liverpool
Common Scams & What to Avoid
C&C’s Google Map of the City

Liverpool Travel Blog: Where, How?

Liverpool John Lennon Airport, named after John Lennon of the famous Beatles, sits on the edge of the Mersey River. Navigating your way around the airport is relatively seamless.

There are regular bus links operated by Arriva to and from the city center. Another option is to board the dedicated “Airlink” express service “500” which takes approximately 30 minutes into the city center. Its schedules are quite restricted and it costs a fraction more but is faster.

Transportation within the city is easy to navigate through taxis, bus services, and “Merseyrail” services.

A Note on taxis:

You can hire a private taxi or hail one from the side of the street when it is not too busy. Taxis are metered and receipts are available.

As a visitor to Liverpool, be sure to visit Chinatown, Albert Dock, Ropewalks and Calderstones Park (kids friendly).

Navigation tips: Both the Mersey and the Irish Sea border the city to its West. Remember where the water is, you’ll remember where you are.

More About Liverpool on C&C

Where to Stay in Liverpool- Liverpool Travel Blog: “Why is English food so bland”: Wapping Quay, Liverpool, England

Liverpool is the birthplace of the Beatles and from a tourist standpoint, it is all about them. There are many different things to see and places to visit relating to the Fab Four.

Liverpool is also home to the Liverpool FC and Everton football clubs.

One of the main tourist places to go is the Albert Dock. There is an area downtown close to the train station that is very popular for shopping, and there are two important neighborhoods, the Cavern Quarter and Ropewalks, where most of the nightlife happens.

Liverpool is a small city, and you have to scratch the surface to see what is beyond the downtown and Albert Dock areas. Its people are as friendly as the English can be.

Liverpool is a Beatles fan utopia, and there are some legit and less legit Beatles attractions. Among the legit attractions are their childhood homes, the Beatles Story Museum, and a host of hotels, cafes, bars, and pubs, all either closely or loosely related to the theme.  And, of course, there is the legendary Cavern pub, where they started their career and were discovered.

The city also boasts Europe’s oldest established Chinatown, which is difficult to find.  You have to know where it is in order to visit.

One of my favorite times in Liverpool was going to an Everton football game.  Not only was the game a lot of fun, but equally as entertaining was meeting the locals who were on their way to the game. The Everton stadium is a bit outside of town, so taking the train with the local fans and walking around the residential area where the stadium was situated has allowed me a bird’s eye view into the day-to-day lives of the inhabitants of the city. An the architecture of the townhouses of the outskirts of Liverpool are the exact same as in the movies!

Liverpool Travel Blog: Where to Stay in Liverpool

Remember: this is England, which means British pounds, which means that it’s EXPENSIVE, which includes hostels and hotels where to stay in Liverpool.

The hostel I visited while in Liverpool was expensive, dirty and felt more like a cross between a roadside motel and a homeless shelter than a hostel. And it’s the #1 best rated in all of the city! Needless to say that it is not recommended here when looking where to stay in Liverpool.

In fact, there are not that many hostels in Liverpool, compared to some cities of the same size. The only one I’ll recommend here is Euro Hostel Liverpool.

If you are in a hurry and don’t want to waste much time on searching where to stay in Liverpool, go here straight.

As far as hotels go, Pullman Liverpool and The Nadler Liverpool offer good value at this end of the spectrum. Hope Street Hotel and The Shankly Hotel are also interesting choices where to stay in Liverpool. (The last 4 are 4-star hotels).

The Liverpool Chinatown was the first to be established in Europe and is you can recognize it by its beautiful crafted Chinese Arch. Options where to stay in Liverpool in this area are: Novotel Liverpool Centre and The Nadler Liverpool.

But if I were to choose only one hotel where to stay in Liverpool, even if it’s geeky and clearly over-the-top, Penny Lane Hotel is an all-Beatles hotel.

There are many mid-range options, but the online reviews for most of them are quite bad. Hotel 46 is my choice where to stay in Liverpool.

I wrote a column about my personal experience. I was looking for an “English” restaurant. It wasn’t easy. Thankfully, I was directed to a good restaurant: The Hub alehouse & kitchen. I absolutely enjoyed my time there.

Another very good option: 60 Hope Street. You can choose from a full sit-down menu upstairs or a pub with its pub food downstairs. When you a make decision on where to stay in Liverpool, check also about the restaurant options.

Fraiche is the only Michelin-starred restaurant in Liverpool.

Unfortunately it’s all that I have for you. The value I got from my meals in Liverpool – the quality versus the cost – was simply not very good. Sorry.

Beer is the preferred drink of choice at any bar, pub or club. But before you engage in drinking like a local, you might first want to learn how to say beer in the local language, once you are at a bar ask for a “bevvie” or a “few scoops”, you will fit right in!

Drinking in public is not forbidden, with the exception of areas protected under the Public Space Protection Order. If you are going to engage in public drinking during your trip, do ensure you are over the age of 18 and if you are asked to prove your age, kindly oblige. Paying a fine of £1,000 may not be worth ruining your vacation over. Always drink responsibly!

When you decide on where to stay in Liverpool, keep in mind the bar and beverage options available.

Liverpool Travel Blog: What to See and Do

When visiting, do not be afraid to immerse yourself in its long history by visiting exceptional historical sites and landmarks throughout the city. Take a guided tour and learn more about the culture and city which produced the world-renowned Beatles. The city was once considered a “maritime titan” as a major trade city and has been awarded six World Heritage sites from UNESCO.

When you pick your option on where to stay in Liverpool based on what you want to do and see in the city.

The city center of Liverpool has plenty to offer in terms of shopping, museums, landmarks, restaurants, and bars. If you are a Beatles fan visiting The Beatles Story is a must see, a museum devoted solely to them, with artifacts from the band. Another museum of interest would be the Merseyside Maritime Museum for those of you who are maritime fans.

Liverpool is home to the Liverpool Football Club, one of the most successful English League clubs in the European Championship cup. Visiting football fans and aspiring footballers would not be disappointed as you will be sure to become engrossed in the singing of the club’s anthem “You’ll never walk alone.”

If you are visiting between, June 22 – June 26, 2017, be sure to check out the International Mersey River Festival and be amazed!

Just like in most of Europe, no tips are expected but it is always a nice gesture. It is common to tip 7-10% of the total cost of the bill if there is no service charge included already.

Liverpool is a fairly safe city and there are few scams, but you still need to be careful, just as you would in any other city.

Crime-wise, the two problematic neighborhoods, Ropewalks and Cavern Quarter, are the places where tourists are likely to be and the ones that see the most crime. It is mostly people who are mugged at night, usually at knifepoint. Fights do break out sometimes after the pubs close. There is a heavy police presence when the pubs close, which adds to the feeling of safety in the city.  Make sure you don’t get too drunk and keep your wits about yourself.

When you decide on where to stay in Liverpool, be sure to avoid these places.

How to Stay Safe and Where to Stay in Liverpool: Tips and Tricks