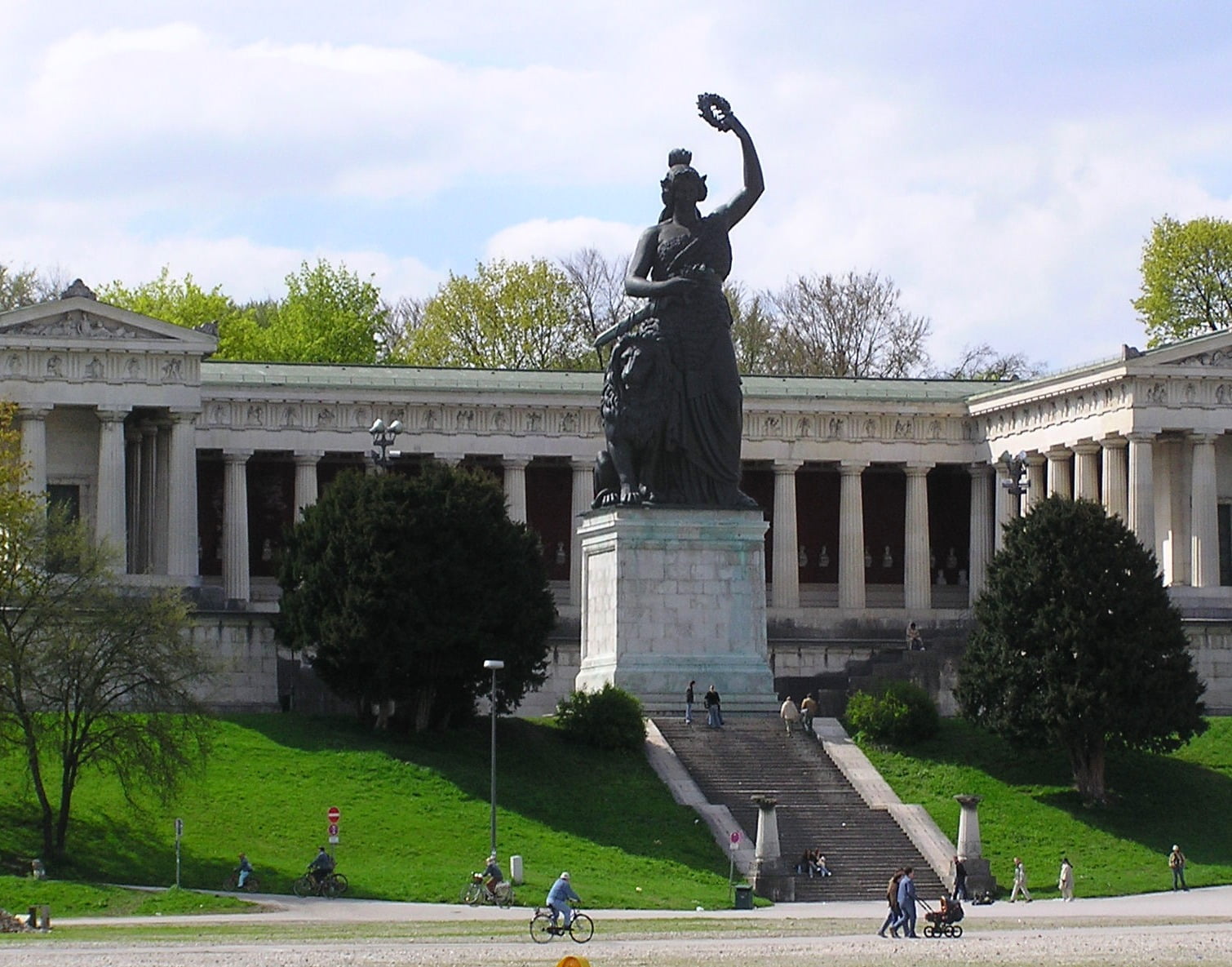 Where to Stay in Munich- Munich Travel Blog: The Bavaria, a statue on the Theresienwiese park
Home
Destination Guides
MUNICH

Where, How?
Munich on C&C
Best Time To Visit Munich
Personal Notes
Where to Sleep
Let’s Eat!
Let’s Go For a Drink
What to See and Do
Tipping in Munich
Common Scams & What to Avoid
C&C’s Google Map of the City

Munich Travel Blog: Where, How?

Airport Notes: It’s a beautiful modern airport with a great design. It’s easily accessible from the city. It’s a model for other airports.

Transportation to-and-from the airport: You can go from the airport to city centre by taking the S-Bahn on the S1 or S8 line. Otherwise, you can also take a taxi for around €60 to arrive in 40 minutes or so.

Intra-City Transportation: To get around the city, there is public transportation, which is the best way to move around the city because of its size. Not only would it be cheaper but also much faster. The great thing about taking public transport is that they only have one ticket system which is called the MVV, so you can use the same ticket to take the S-Bahn (train), U-Bahn (bus), trams, or buses. Alternatively you can rent a car, take a taxi, or if you are confined to one area, walking around is a good option.

Taxis in Munich are well-regulated so there is no need to worry about safety while travelling in one. They are beige colored with a taxi sign on the roof.

Navigation tips: There’s no perfecy way to navigate this city, as it’s streets aren’t straight, its corners aren’t 90-degrees and it’s not built with its river as its core. Use your smartphone!

More About Munich on C&C

Where to Stay in Munich- Munich Travel Blog

Munich is a clean and orderly city that is highly regulated. Munich is all about beer, particularly wheat beer. The city’s claim to fame is the iconic beer festival known as Oktoberfest.  Oddly enough, Oktoberfest occurs at the end of September, not in October.

Munich is an art lover’s dream. There are countless museums filled with historical, modern, and design art. There are also numerous beautiful parks to explore.

Munich is a pub mecca. There are many different pubs called Bräuhaus and in the summer, many are open outdoors. One of the great things about this city is having a few beers while enjoying the afternoon sun.

My personal anecdotes are all about Oktoberfest. My very first visit to Oktoberfest was a special one. It was when I realized that everyone in this city respects the rules. While German people are not the most expressive, Oktoberfest is a completely different story. Everybody is very drunk. At the end of the day, it is not unusual to find people scattered pretty much everywhere on the grounds. Some people are simply passed out and there is vomit everywhere. The ambulance is frequently called upon because of the numerous instances of alcohol poisoning.

While Oktoberfest is absolutely NOT representative of the city of Munich, it is the image that is the most popular around the world.

Where to Stay in Munich- Munich Travel Blog: The Bavaria, a statue on the Theresienwiese park

Munich Travel Blog: Where to Stay in Munich

There are many different accommodation to choose from, here are my suggestions on where to stay in Munich:

Hotel Torbräu is located in the city centre, within walkable distance of many landmarks. It is very well-rated and is good value. If you prefer high end options as answer to you question on where to stay in Munich, you might try this.

Cocoon Hauptbahnhof is a great place where to stay in Munich if you’re on a budget. It is located near the public transport, with clean and stylist decoration.

Hotel Metropol is perfect if you’re heading to Oktoberfest – Theresienwies is only a 8-minute walk away! There are also several underground stations so getting around is extremely convenient.

There are also your major chain hotels such as Mandarin Oriental, Munich Marriott Hotel and Hilton Munich City.

Obviously most people can’t go to Munich without having a beer or two which, naturally, needs some Bavarian food along with it.

I’ve written an article about my favourite restaurants in Munich. I’ve also critiqued many of them, including Munich’s best fine-dining restaurant, Dallmayr. If you have the money, you really should go there. It’s spectacular.

Here are a few extra suggestions for you!

When you a make decision on where to stay in Munich, check also about the restaurant options.

Wanna try the famous Oktoberfest butter-roasted chicken but aren’t visiting during the right time? You’re in luck! Lindwurmstüberl is a restaurant that serves the classic (and delicious) Bavarian roast chicken. It’s awesome.

Hirschgarten (Hirschgarten 1) sits one of the largest and oldest beer gardens in Munich. Tables with tablecloths belong to the restaurant section which is served by a waiter. Tables without tablecloths are self-service areas. Try the giant pork knuckle, Bavarian pretzels, or roasted chicken – all whilst washing it down with a local beer. There is even a deer park nearby to keep you or your children entertained!

Alter Simpl (Türkenstr. 57) is a great hang-out spot which is frequented by students as it is located near the universities. Grab a drink or a schnitzel with friends and enjoy the local atmosphere.

Schmalznudels are like the German version of doughnuts. You can find them at Cafe Frischhut where they are freshly made. I can’t think of anything better than some warm, deep fried dough and a coffee for breakfast. Despite the underwhelming exterior of the shop, there is almost always a massive queue outside so come here early!

Drinking in public in Munich as most of Germany is really not much of a big deal; it is unlikely you will get stopped. However, if your drinking gets out of control and you get too loud and rowdy then this is a different story. The legal drinking age in Germany is 16 years old.

Here is a list of bars/clubs – go for the beer and everything else!

Don’t look for where to stay in Munich far away from a crowd favorite bar.

Where to Stay in Munich-Munich Travel Blog: Spatenhaus, Munich beer hall: The decor

Munich Travel Blog: What to See and Do

Oktoberfest was first started in October of 1810, which is more than two hundred years ago! For this to be going strong and getting bigger and bigger each year it must hold some significance to those who keep it alive. The festival was started as a celebration to commemorate the marriage of Prince Ludwig of Bavaria and Princess Therese of Sachsen-Hildburghausen. Millions of visitors from around the world gather in Munich to celebrate Oktoberfest! There is beer, beer and more beer!

If you want to experience authentic, mouthwatering, fresh, and delightful produce and of course beer, visit Viktualienmarkt. This market gives you all the fruits, vegetables spices, meat and fish conceivable with plenty of places to have a quick bite if you choose to.

Munich is filled with attractions for everyone, art, architecture, beer gardens, castles and palaces, churches, great landmarks, and museums and galleries. Do not be afraid to explore the city.

Things to do at Oktoberfest: Where to Stay in Munich:Munich Travel Blog: Munich’s Oktoberfest – Photo Credit: Cedric Lizotte

Just like in most of Europe, it is not expected to tip but it is a nice gesture. If you have received good service, you can either round up or tip 7-10% of the total cost of the bill.

It is always a good practice to decide on where to stay in Munich away from these places.