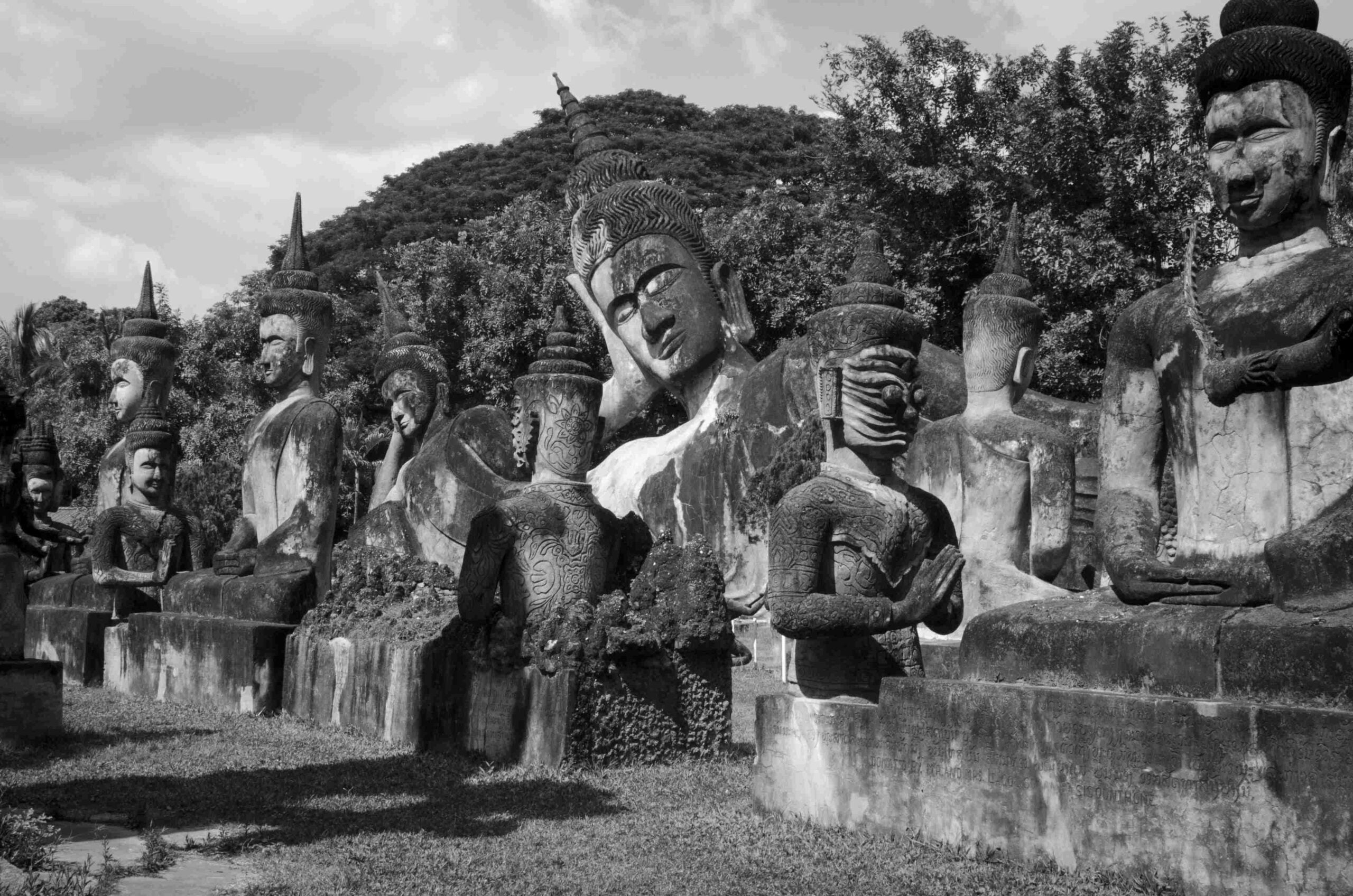 My Impressions of Vientiane: Serene

VIENTIANE, Laos – In a park about ten minutes’ drive from downtown Vientiane, capital of Laos, a Buddha stands in the Buddha park; then another, then another; huge concrete sculptures, sometimes weird, sometimes exaggerated, and sometimes eclectic. They are giant, impressive and disturbing. Faces, sometimes small figurines, sometimes several meters high, look into the abyss. And the sculptures give the impression of being a few hundred years old, with funny stains and sometimes plants growing on their heads, their shoulders, and their necks.

Most of the sculptures, the oldest dating back to 1958, represent Buddha. However, Luang Pu Bunleua Sulilat, the creative artist of this “Buddha Park”, believed in a spiritual amalgam that combined Buddhism and Hinduism. This man had to leave Laos at the end of the civil war, when the Communists took power. And this precarious collaboration between several religions, authorities, communism and various ethnic groups is alive today in Laos’ nation capital.

Vientiane is a small town along the Mekong River, just a few meters from Thailand.

South East Asian capitals such Bangkok and Hanoi are recognized as exciting, hectic, maybe even overwhelming. And so we come to Vientiane to find a little peace. Its downtown is relatively developed, but as soon as you venture outside the few paved blocks, you quickly understand that Vientiane is the capital of a very poor country, with about a third of its population under the poverty line. In fact, agriculture is the main engine of the economy.

My Impressions of Vientiane: Vientiane, Laos: On Our Way to Buddha Park

My Impressions of Vientiane: Laos History

Laos also continues to suffer the effects of the Vietnam War. The country was on the receiving end of more than 500 air attacks per month during nine years, and the fields – key economic tool – are still covered with mines. About 80 million bombs ready to explode at any moment now litter the farmland and the victims are numbered in the thousands. If you take into account the importance of agriculture in the Lao economy, thinking about the pervasiveness of these mines gives chills down your spine.

Note: Are you headed to Cambodia next? Check out Frugalfrolicker.com’s guide to Koh Rong!

The influence of neighboring countries is palpable: tuk tuks and ladyboys, from Thailand; French-style bahn mi sandwiches from Vietnam; betel nut chewers everywhere, like in Myanmar; stir-frys of all kinds like in China; pra hoc (fermented fish paste) in almost all dishes like in Cambodia.

Despite the fact that the country is communist since 1975 when the King, the Queen and Prince were murdered, the road signs and street names are listed in Lao – with its own alphabet derived from the old Siam – and in French, the language of the last colonial countries. The Laos, however, do not speak a word of French.

And the relatively new serenity that this country offers can be found about ten kilometers north of Vientiane.

Note: I think Vientiane is cool and calm, and PassportSymphony agrees! Read their Vientiane travel guide!

Lost on an unpaved road, there is a parking and a large banner announcing a restaurant. But the most obvious building seems empty. And behind the building, a dozen small huts are installed and stand on stilts out on a lake. A network of fragile bridges allows people to move from one hut to another. A group of Laos is playing a game of cards, shout and drink lao-lao – the local distilled rice alcohol. And at the end of this chain of culverts, the clear blue sky reflected on the lake reveals itself in a perfectly quiet setting. The Buddha park is a bit far away, but the oddball atmosphere is still present.

In the lake in the distance, women are fishing with triangular nets, both feet in the lake, submerged to the neck, with their small bamboo hats. Other women, on the mainland, are working to gather a herd of buffalo. And life does not seem to have changed a bit over the years.

The food is plain, but who cares? Life has stopped. Nobody ages. Nothing can be disturbing. Everything is off. Beer Lao remains cold. And Laos, among its South-East Asian neighbors, remains to tourists at least, the forgotten one.

My Impressions of Vientiane: Vientiane, Laos: On The Lake

My Impressions of Vientiane: Vientiane, Laos: At the Market