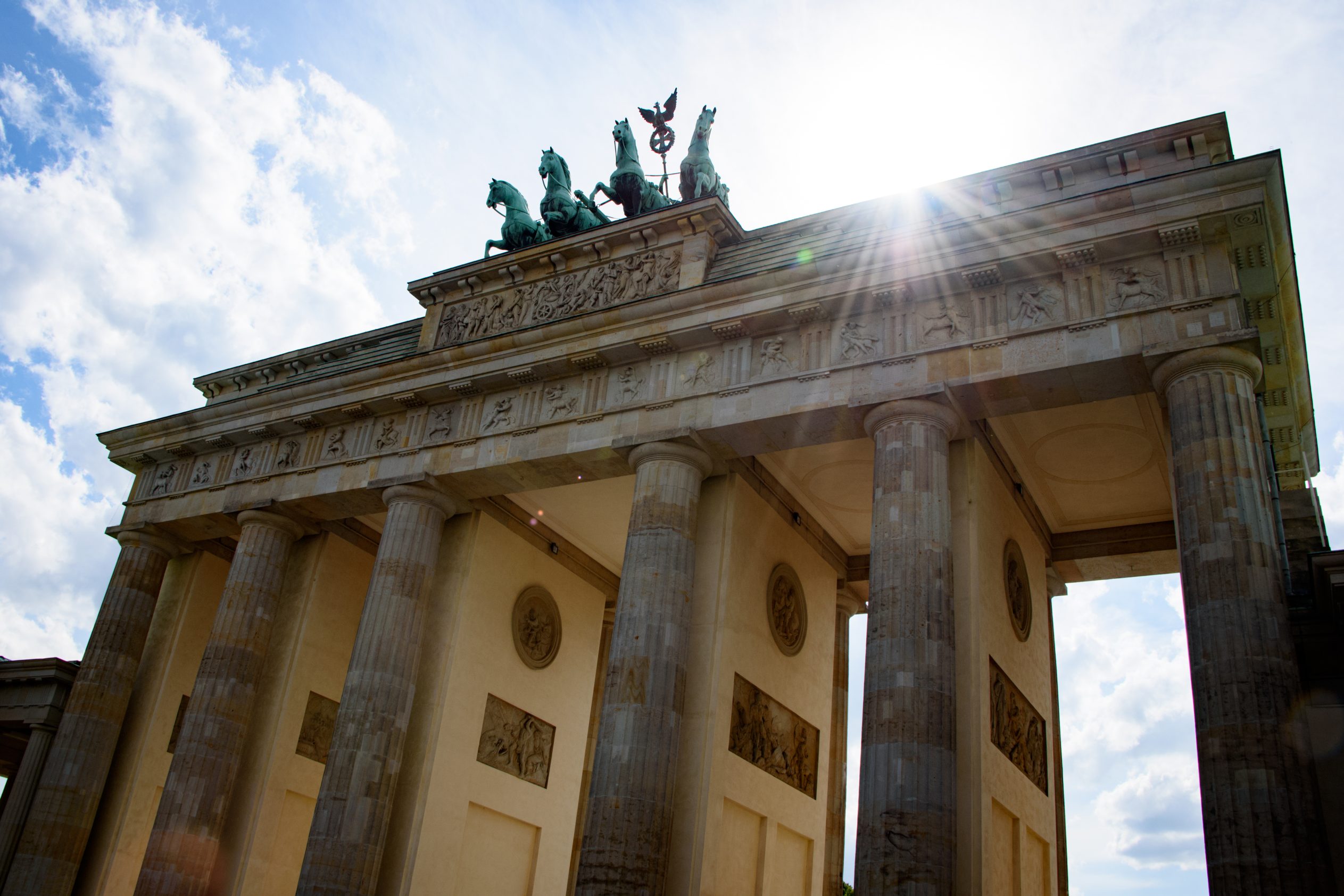 Where, How?
Berlin on C&C
Best Time To Visit Berlin
Personal Notes
Where to Stay in Berlin
Let’s Eat!
Let’s Go For a Drink
What to See and Do
Tipping in Berlin
Common Scams & What to Avoid
C&C’s Google Map of the City

Berlin Travel Blog: Where, How?

Airport Notes: Berlin Tegel Airport is the main airport in Berlin, while Berlin Schönefeld Airport acts as the secondary one. The former handles around 20 million passengers every year, has 4 terminals in close proximity to each other and is situated only 8 kilometres away from the city center, serving as the hub for Eurowings and Air Berlin. The latter is located 18 kilometres away from the city center, handles over 11 million passengers every year through 4 terminals and is the base for Ryanair, easyJet and Condor.

Transportation to-and-from the airport: Berlin Tegel Airport is integrated with local transport network; bus stops are located just outside Terminal A and B.

Berlin Schönefeld Airport allows you to take S-Bahn or the Airport Express straight to the city center. It is possible to take the bus too, including express buses and night buses.

Berlin boasts a well-organized transport network. It includes U-Bahn (subway), S-Bahn, which allows you to get to the suburban area quickly, buses and trams.

A Note on Taxis: They’re safe and clean and somewhat expensive.

Visit Mitte, Berlin’s most central district to see Reichstag, Brandenburg Gate and some of its oldest buildings, Marienkirche and Nikolaikirche. Kreuzberg is filled with street art and young people of different ethnicities and within a short distance of the former Berlin Wall. Friedrichshein is a place to taste nightlife with a lot of things to do in Berlin, full of bars and clubs. In Charlottenburg you can find Charlottenburg Palace or see the famed KaDeWe, a luxurious department store. Tiergarten is a place where you can take a stroll in the city’s most popular park and buy something in one of the district’s many flea markets.

More About Berlin on C&C

Most importantly, Berlin is all about young people and hipster vibes. Thus, it is very artistic and a lot of new things are going on there. Furthermore, the city is a mecca for creativity and all of this gives it it’s great feeling.

First, there are so many young, excellent chefs constantly pushing the culinary envelope. Also, there is a lot of techno music and contemporary art galleries are everywhere. Berlin’s architecture, and its design, in particular, are important for the city and most tourists inevitably take it all in. Then, once they get past the historical attractions, they can start to see the city for what it is, a modern city not bound by its history.

Tourists inevitably end up going downtown (Mitte) to Checkpoint Charlie, the Ritz Carlton, and Brandenburg gate, but the real life is not found there.

The Teirgarten is probably one of the most beautiful inner-city gardens in the world and is a must-see.

Friedrichshain has Oberbaum Bridge, Mauerpark, Kreuzberg has cool, crazy, fun cafés and art galleries and also a lot of clubs.

Charlottenburg is a quaint little residential neighborhood and cafés, neighborhood restaurants and a real-life feeling inhabits it – as well as some of the wealthiest residents of Berlin. Oh, and the famous castle of the same name is in the borough, too.

Neukoelln is also a very popular spot. The many Turkish restaurants there are a destination in and of themselves.

I have been to Berlin several times. During my most recent visit, the food, in particular, was great. I have visited some of the best restaurants in the world and have had a few of my favorite meals in Berlin. You can read all about these experiences right here: What to Visit In Berlin? Restaurants! It’s a Foodie City!

Best Hostels in Berlin- Berlin Travel Blog – Hotel am Steinplatz, Where to Stay in Berlin: My bed


This can be a difficult question to answer where to stay in Berlin. It’s a bit of a scattered city, and there are wonderful locations that can seem quite far from the centre on a map. As usual, let’s consider the budget, the type of establishment and the need for proximity to party locations.

I was lucky enough to have some of the most wonderful, luxury, 5-star-GL accommodations on my last trip.

The Ritz-Carlton, right off of Potsdamerplatz in the middle of the downtown area, is spectacular place where to stay in Berlin. If you want a really cool tip on best hostels in Berlin, pick this.

The same can be said about the Regent, which is a couple of blocks away from Checkpoint Charlie.

Slightly off the beaten path and right in a quiet, high-end residential neighborhood, Hotel Am Steinplatz is contemporary, stylish, and boasts one of the fastest WiFi networks I’ve ever encountered.

Right on the Tiergarten is Das Stue. Ideal if you want to be transported in a totally different world.

That being said, there are great budget options where to stay in Berlin in some of the most interesting neighborhoods of the German capital.

The best-rated hostel where to stay in Berlin is in Pankow and is called EastSeven Berlin Hostel. It’s a bit off the beaten path, but there are two great Imbiss nearby, Konnopke’s Imbiss and Imbiss 204!

Want to stay in Neukölln? Riverside Lodge Berlin is a great bet.

Maybe Charlottenburg is your favourite neighborhood where to stay in Berlin. Let’s head to Aletto Kudamm Hotel & Hostel, then.

All in all, hostels where to stay in Berlin are on the expensive side, but offer some of the best amenities in the world.

Our Suggestions – Dishes and Restaurants

Berlin is probably my favourite fine dining city in the world. I know, it’s not usually on top of everybody’s list. But there’s a lot of innovation and exploration going on in Berlin right now.

When I visited Horvath, it didn’t have any Michelin stars. It now has two. Go. It’s great.

Tim Raue Restaurant reached # 48 in the World’s 50 Best list in 2017. It’s strange, it’s a challenge, and it’s not for everyone, but it definitely pushes every single boundary about eating you’ve ever imagined.

Don’t look for best hostels in Berlin far away from a good restaurant and dining options.

Have you ever dreamt of eating at El Bulli, the überfamous restaurant on the Costa Brava in Spain? One of the chefs trained there has opened a pure molecular gastronomy gem in Berlin. It’s called Cinco and the chef is Paco Perez.

At Reinstoff, everything’s meticulous, but it’s also a fun, laid-back room. I had a spectacular night when I went.

Borchardt is one of those ultraclassic, unchanged by time restaurants that might be a bit of a business-lunch/tourist-trap type of place, but it’s such a spectacular room…

Sometimes, if you’re burnt out from travelling and looking for comfort food, what you need is a steak. Midtown Grill is the right place to get such a thing.

The Brasserie Desbrosses is the restaurant of the Ritz-Carlton. It’s a French bistro. You know what to expect!

Max und Moritz is another one of these large, classic, German halls which serve spectacular pork dishes. I love this place.

There are a few mandatory stops in Berlin.

Curry 36 is one of them. Get the currywurst, a local beer, and the fries. Do like the locals!

Döner kebabs and dürüms are everywhere in Berlin. And they’re great.

The Hühnerhaus has great chicken.

Locals drink beer. Lots of it.

It is legal to drink in public in Berlin.

Our Suggestion – Bars and Pubs

Berlin is full of places where you can have a drink, and everyone can find something to their own taste. Don’t forget to bring cash, as most bars and pubs don’t accept credit cards.

Don’t look for best hostels in Berlin far away from a crowd favorite bar.

Prater Garten (Kastanienallee 7-9) is Berlin’s oldest beer garden. There you can drink home-brewed Pils and enjoy Bratwurst and pretzels – Bavarian style dishes. This one attracts a rather big crowd, though.

Das Hotel (Mariannenstraße 26A) is a venue for hipsters, but not only! Located on a quiet street, it also attracts many beer-loving locals who enjoy its cozy interior full of large wax candles.

Die Weinerei (Veteranenstraße 14)  is a place where you can drink wine. It stands out from the crowd though. Pay just 2€ to rent a glass and drink til your heart’s content. When you’re finished, put as much money as you like into the tip jar.

Berlin Travel Blog: What to See and Do

Along the Spree river sits the East Side Gallery, the longest remaining part of Berlin Wall, now turned into an open-air gallery, free for anyone to take a stroll and admire anti-war pieces of work left behind by numerous artists.

Check out Mauer Park and its big flea market, a paradise for bargain hunters.

The DDR Museum offers a look into the past – if you want to experience how life in East Germany was like, you have to see it. Likewise, the Holocaust Memorial, a giant monument commemorating 6 million Jewish victims of Hitler’s regime, also presents a bit of Germany’s story. When you pick your option on best hostels in Berlin based on what you want to do and see in the city.

For fast-paced sightseeing, try renting a bike, as Berlin is a bike-friendly city, or going on a cruise.

It is possible to admire Berlin’s panorama in a number of ways. For one, climb up the TV Tower, Germany’s highest building. Weltballon offers a unique experience of going up in a helium-filled balloon.

Germany’s capital is a multicultural, liberal city and you can see that well during Karneval der Kulturen, an annual colourful event taking place in June, or Love Parade, a demonstration of love of all sorts.

Just like in most of Germany, tips are not expected but it’s always a nice gesture. Anywhere between 5-10% of the total cost of the bill is an appropriate amount.

There is very little crime in Berlin. The regular and common warnings apply.  If it looks too good to be true, it probably is.

I have never heard of any taxi scams in Berlin. Also, public transportation is very efficient, so I would advise using it.

It is always a good practice to decide on best hostels in Berlin away from these places.

There are no problematic neighborhoods as far as I know.