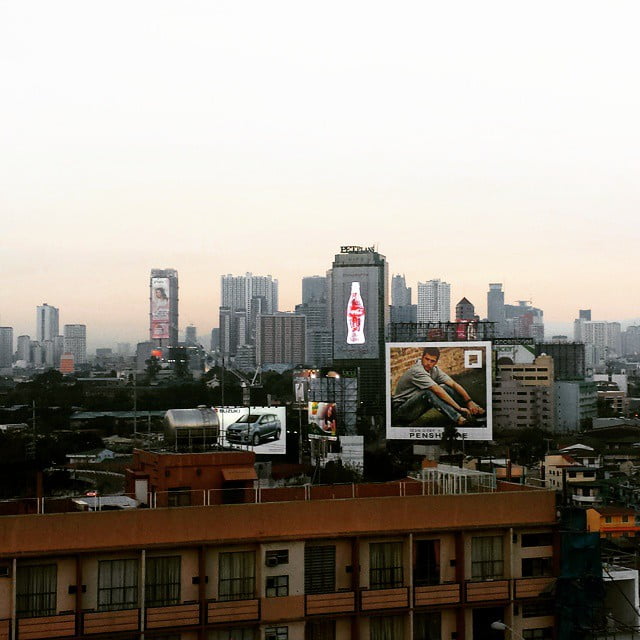 Where, How?
Manila on C&C
Best Time To Visit Manila
Personal Notes
Where to Sleep
Let’s Eat!
Let’s Go For a Drink
What to See and Do
Tipping in Manila
Common Scams & What to Avoid
C&C’s Google Map of the City

Manila Travel Blog: Where, How?

Transportation to-and-from the airport: There are airport metered taxis just outside the arrival hall that are caught as they drop off departing travellers. Also outside the arrival hall are buses and jeepneys (pickup trucks organized as small buses) that head downtown. They cost a lot less than taxis, but can be confusing if you don’t speak the language or have no exprience with jeepneys… or if you have luggage!

Tricycles and pedicabs are ideal for short journeys to places that are otherwise inaccessible.

Jeepneys (a symbol of Filipino national identity) are available at many roadside stops, but go with a local at least once, because understanding where the jeepney is actually headed can be confusing. the routes they ply are displayed either on their sides or on the dashboard.

A calesa is a horse-drawn carriage that can come in handy when navigating the narrow streets of Intramuros, mostly. Many people have ethical concerns about such mode of transportation.

They’re cheap and convenient, though traffic is a total mess in Manila. As I very often say, you should use your GPS to estimate the fare before you hop on, negotiate the price before you get in the car. Then, at destination, have the exact change.

Also, take a look at the safety section of this guide for further tips on taxis as they are not safe in Manila.

Bear in mind that Manila is a megalopolis, the most densely populated city on earth, and has dozens of neighborhoods.

Makati, Quezon City and Intramuros are the most visited neighborhoods.

Santa Cruz is home to the Chinese Cemetery where Chinese burials were restricted to during colonial times. Sampaloc is where Asia’s oldest university is located.  Tondo is a densely populated and impoverished neighborhood with high crime rate. Malate, on the other hand, is an upper-class neighborhood known for its big mansions. Binondo is one of the world’s oldest Chinatowns. San Nicolás is the place to buy on wholesale and at a bargain.

Navigation tips: For any newbie, finding your way in a new city can be difficult. There aren’t really any geographical points to use as an anchor. I used the “Metro Manila Skyway” as my reference point, but it’s not foolproof. Keep your GPS at hand at all times! Sakay.ph is frequently used by locals, though Google Maps is very precise as well.

More About Manila and the Philippines on C&C

Where to go in Manila:Manila Travel Blog

It’s the capital of the Philippines and it’s not only one of the largest, but also most densely populated cities on Earth. It’s congested, polluted and quite dirty. However, the people are extremely nice for the most part.

Well, to be honest, in Manila, there is not much to see. Most locals that want to have fun, especially in the evenings, will end up spending time in shopping malls. This means that restaurants, bars, cinemas, and even parks are part of shopping malls. People go hang out there mostly because of the air-con – it’s a very hot city. The neighborhood of Makati is probably the most popular with tourists and there’s good reason for that. This is where you will find most of the cooler restaurants, bars, and fun places to hang out that are not part of shopping malls.

For me, the traffic in Manila was probably the number one personal anecdote that I can tell. I was stuck in traffic in the taxi getting out of the airport and I basically had to do five or seven kilometers, which took at least two hours. The most impressive for me was the fact that there was only one train in all of Manila. It’s basically a train that is in the middle of a highway that serves as a metropolitan train. The security is very heavy and there are a lot of people who want to use these trains. At rush hour, people were trying to get in the station then onto the trains. The line to even get into the station was meters and meters long. There was also heavy security which means the people that want to get inside the station have to get a pat down, have to get their bags scanned and everything – heavier security than in most airports. Once this is done they have to try to get inside a train, and these trains are overloaded; they’re extremely packed. It’s very difficult for people to get from point A to point B, and that is the reason why Manila is the capital of the Jeepney. Jeepnies are basically pick-up trucks that have been transformed by entrepreneurial people and they will take you from point A to point B for a small fee. This is how people usually travel.

Where to go in Manila-Manila Travel Blog – Take a jeepney somewhere!

Manila Travel Blog: Where to go in Manila

An area that has a lot of hotels: around Roxas Bouvelard in view of Manila bay, or Ermita and Malate districts all of which are not far from the airport.

Hostels: There are a few extra-cheap options. These can be quite dirty and a lot of people seem to be “living” in them. I don’t suggest any, of course.

And there are a few, more expensive (relatively!), cleaner spots. My suggestions: Makati Junction Hostel and Bahay Kubo Hostel.

Most major international hotel chains in Manila are cheap in comparison to same-class hotels in other cities in the world. Cheap as they are, staying in one of them is considered a luxury by Filipinos.

Since it won’t be much of a splurge, you might as well take advantage. Bayview Park Hotel Manila is a good place to start.

Food in the Philippines is quite varied, but there are a few staples. Rice is one: it’s found everywhere, on every table, and for every meal.

Filipinos love Jollibee! It’s nicknamed the “Filipino McDonald’s”, which is somewhat accurate, yet not 100%. Some of the dishes are the same – burgers and fries – but there’s also a strange spaghetti and other weird stuff. Go and try things!

This is perhaps the best answer to the question of where to go in Manila.

Remember that #1- most of life in Manila happens in shopping malls and #2 – street food is king, and I don’t have actual street addresses to offer you for that reason. For last-minute options on where to go in Manila, you may consider these.

Since my experience in Manila, restaurant-wise, wasn’t great, I asked a friend, who’s a local, to list a few of her favourite places. Here they are!

My favorite go to places:

Drinking in public is prohibited.

With cheap liquor and hospitable foreigner-friendly locals, Manila nightlife is one of the best in Asia.  Makati, Quezon City and Bonifacio Global City are the party districts of Manila and Pasay/Parañaque its red light district. Don’t look for where to go in Manila far away from a crowd favorite bar

Black Market is a nightclub popular amongst expats and hip Filipinos, plays everything save for EDM.

Prime in Quezon City is cheap, has a relaxed vibe and a youthful crowd.

Pangaea is also chill with low ceilings and an underground vibe. RnB is their music genre of choice.

Privé frequented by expats, Manila’s elite and celebrities is arguably the most exclusive club in Manila.

Where to go in Manila: Manila Travel Blog – This is a copyright-free photo

Manila Travel Blog: What to See and Do

Rizal Park is where Filipino hero Dr. Jose Rizal was executed and buried. Inside Fort Santiago at the Rizal Shrine is where he was imprisoned before being taken out. Don’t look for where to go in Manila too far away from a happening tourist attraction.

Go back in time as you walk along the legendary wall of Intramuros that was built to keep invaders out of the city.

The National Museum of the Philippines is the place to go for all things Filipino history.

The National Library of the Philippines is quite simply a book lover’s paradise with a countless number of books on its shelves.

Take a stroll down Manila Bay, watch as the sun goes down and the city comes to life.

Star City, an amusement park was made for families to spend time together and strengthen bonds as they try out all the fun activities they have to offer.

Across Pasig River, you can look at the Malacañang Palace, the president’s official residence, and workplace.

If you have a thing for picturesque churches, Manila Cathedral, Quiapo Church, San Agustin Church, Malate Church and Plaza Rajah Sulayman are a must-visit.

For all your shopping needs, go to SM Mall of Asia, Robinsons Place Manila and SM Manila.

Where to go in Manila: Manila Travel Blog – This is a copyright-free photo

Just like in most of Asia, it is not common to tip but it is a nice gesture. If you’d like to do so, 7-10% of the total cost of the bill is a good amount to tip.

Manila is Scam City. Any scam that you can imagine has been done in Manila. There are a lot of poor people and anywhere you go in Manila you will find beggars, including children and older people.

There is also a lot of corruption in the Philippines in general, including Manila. This means that you have to be just as careful with policeman and officials as you are with other suspicious people. In 2015, a news story came out that a scam was happening at the Manila airport in which immigration officials would plant bullets in people’s bags in order to accuse them of smuggling firearms. They would then ask for a bribe in order to keep the tourist from getting into trouble. It’s internationally recognized that this scam was happening, but it unclear whether it is still happening.

Don’t look for where to go in Manila in such places.

Be very careful of money changers and be very careful when you go to the ATM and make sure that it is not a fake ATM. Double check that your card will not be cloned.

There are plenty of pickpockets everywhere. Be very careful if someone approaches you with a story and wants to befriend you. There are a lot of situations in which people will get close to you in order to get your confidence and then attempt to get money from you or scam you.

Make sure that you only use certified taxis with a meter, and insist that the meter is on at all times.

There are problematic neighborhoods, so it’s best to stick to Makati and Quezon City. There are a few other neighborhoods that are fine, but always be aware of where you are.

As I mentioned, there are very nice people in Manila and there are a few ways to go about finding them. Websites like Couchsurfing.com have reviews that help you ensure that the people you meet have been reviewed by others, so if you want to meet locals, this is a good way to do it.