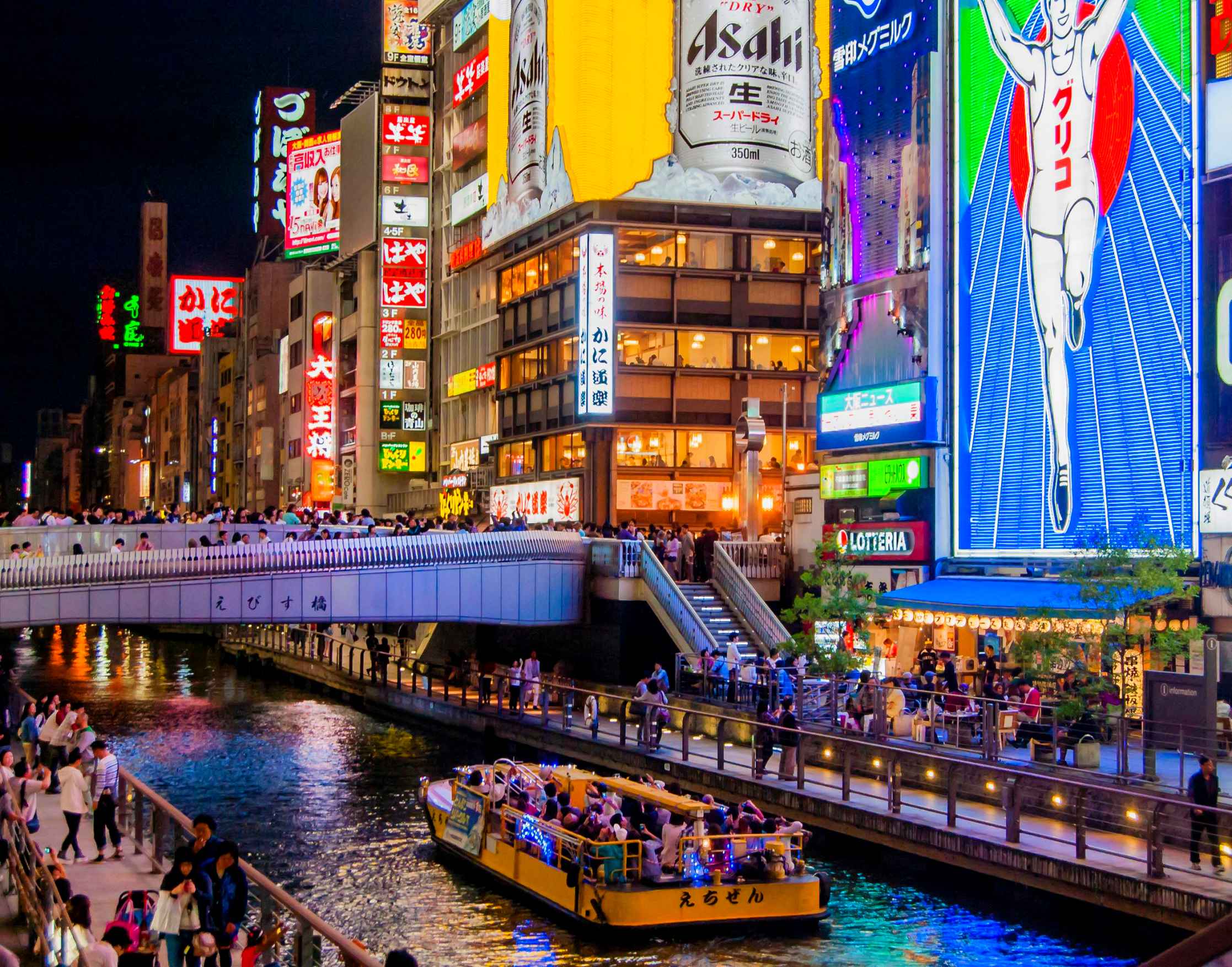 Where, How?
Osaka on C&C
Best Time To Visit Osaka
Personal Notes
Where to Sleep
Let’s Eat!
Let’s Go For a Drink
What to See and Do
Tipping in Osaka
Common Scams & What to Avoid
C&C’s Google Map of the City

Osaka Travel Blog: Where, How?

Airport Notes: Kansai International Airport is on an artificial island in the middle of Osaka Bay. There are two terminals, with free shuttle buses connecting them together.

The airport is connected to the city by the Limited Express Haruka Line that drops off at Shin-Osaka and Kyoto Stations as well as the Kansai Airport Rapid Service(which is slower) that drops off at Osaka Station. Limousine buses are the most convenient as they go directly to hotels around Osaka Station. It is not advisable to self-drive in Osaka since road signs are in Japanese and parking fees are hefty. Moreover, you’d have to have an international driving license.

The subway system is an ideal way to move around because it is extensive and arrivals are broadcasted not only in Japanese but English as well.  The JR Osaka Loop Line traverses Osaka and its fares depend on distance covered. Getting a rental bike is also a viable option since the city streets are flat on the most part and thus easy to navigate. Taxis are expensive and therefore best used only if you have a lot of luggage. Ferries can also be used with-in city limits.

Taxi fare depends on the size of the taxi. Sharing expenses with other passengers (if there are) will help you cut costs.  Tipping is uncommon in Japan therefore just pay what is on the meter. The taxis rear doors open and close automatically, so don’t try to open and close them yourself or risk breaking the mechanism and/or angering the driver!

Hozenji-Yokocho, Dōtonbori and Kitashinchi are famous for their night life. Dōtonbori is also the best place to go find something to eat. Yodoyabashi, Doujima and Hommachi are Osaka’s commercial districts and Kitahama its fiscal district. Its Bay Area is popular among the youth for its entertainment and shopping facilities. Shinsaibashi and Horie districts are about all things fashion.

Though GPS or Google Maps seem like the immediate go-to option, they are not a solution to all problems. Street addresses work differently in Japan. Opt for Japanese-made apps if you are trying to find a map app. Take time to get acquainted with your hotel’s surroundings. There’s no quick and easy way to know your way around Osaka, unfortunately.

More About Osaka on C&C

Where to Stay in Osaka- Osaka Travel Blog

Osaka is considered the party city of Japan. This is mainly because it’s a lot more laid back than Tokyo. That being said, it’s not a place where you can get stupidly rowdy. It’s still Japan so you have to respect how people live and the customs over there. The area around Dotonbori is fascinating. There are so many things to discover including bars, pubs, izakayas, restaurants, street food, and the sights are fun too! There are many marvelous store fronts worth seeing, one of which being a gigantic plastic crab on top of a restaurant’s front door.

The food! You need to go eat! Eat! Eat!  There are a lot of local specialties as well as plenty of foods that are famous all over Japan available in Osaka. It’s a bit laid back so you don’t need to be constantly in a rush like you generally are in Tokyo.

One more thing: Oasaka is right next to Kobe. And in Kobe, there’s Kobe beef. Juss sayin’.

My favorite evening in Osaka was when I made some friends while couchsurfing and we ended up going to a random izakaya on a street corner somewhere. This random izakaya had an English menu… but I doubt the translation was accurate. The strange menu included options such as horse anus and other weird bits. We ended up having a tasting platter of grilled mystery meats and a few sips of shochu. Afterwards, we headed to one of the very large amusement buildings that they have in Osaka, complete with games, arcades and different coin machines, and even amusement targeting girls, all setup on separate floors of an 8-storey building. We made our way straight to the top floor where we attempted to hit a few baseballs in the batting cages. There’s a lot of great entertainment to be had in Osaka.

Where to Stay in Osaka- Osaka Travel Blog

Osaka Travel Blog: Where to Stay in Osaka

Osaka has many hip and modern hostels scattered around the city. Hostel Hyaku, Fuku Hostel Nagomi Namba and Picnic Hostel Osaka are my picks. You can’t go wrong with those.

For mid-range hotels, I suggest karaksa hotel Osaka Shinsaibashi I, Premier Hotel -CABIN or HOTEL MYSTAYS Midosuji Honmachi. Bear in mind, hotels in Japan in general will be smaller than what you might be used to. Having said that, they are still very comfortable and have great service, that’s just what living spaces are normally like in Japan. If you prefer high end options as answer to you question on where to stay in Osaka, you might try this.

Of course, you will be able to find the major chain hotels in Japan as well. Osaka Marriott Miyako Hotel, Hyatt Regency Osaka and Sheraton Miyako Hotel Osaka are just to name a few. For last-minute options on where to stay in Osaka, you may consider these.

Where to Stay in Osaka- Osaka Travel Blog: Takoyaki – Things to do in Oaxaca

Of course, this being Japan, you’ll find some of the best food in the world in Osaka. Every restaurant, every izakaya you see is bound to serve succulent meals.

The Osaka-Kyoto region is considered one of the culinary capitals of the world. Also, remember that the Kobe prefecture, birthplace of Kobe Wagyu beef, is right next door!

That’s what I did when I visited: I took a quick peek inside, and if I liked what I saw, I stepped in and ordered. Takoyaki is usually served street-food style, with a couple of cooks flipping balls in a custom-made pan. Okonomiyaki places usually just have a flattop and a cook with a couple of spatulas. It’s all good, try it!

I’ve written an article that includes many restaurant suggestions. Check it out!

There’s also plenty of high-end food in Osaka. Hajime is considered the best in the city and holds three Michelin stars, which makes it one of the 100 best rated in the world. There’s a total of 4 3-Michelin-starred places in Osaka alone!

Steakhouse Juju is a restaurant that has been on my list for a while. It’s one of the best places to have Kobe Wagyu in the world. Don’t look for where to stay in Osaka far away from a good restaurant and dining options.

Restaurant Misono is said to have invented the teppanyaki style of restaurant. And there’s a branch in Osaka!

Have you ever tried Fugu, the poisonous fish made famous by the Simpsons? There’s a place that specializes in it in Osaka. It’s called Kitahachi. You might need reservations long in advance to get in, though.

This is a tiny list that barely scratches the surface. I’m telling you: Osaka is food. Explore!

Where to Stay in Osaka- Osaka Travel Blog: Okonomiyaki – Things to do in Oaxaca

There are no laws against public drinking.

Osaka nightlife ends early on weekdays since people have to go to work the next day and  they don’t miss the last train. Depending on the neighborhood, on weekends the party goes on all night. Since Osaka is a big city, it is important to find the right spot to while the night away. There are two main spots to do this in Osaka.

When you decide on where to stay in Osaka, keep in mind the bar and beverage options available.

Umeda is great for a chill low-key evening out. You could start out by sampling different cuisines at one of the restaurants then proceed to a bar. You may have to turn in early as the party dies down relatively early regardless of day of the week.

If you are looking to go to a proper nightclub after and stay out late, Namba is the place to be. On weekdays, the party dies down early but it is possible to have an all-nighter on weekends. Plus there is ample supply of night clubs.

But Dotonbori is my spot of choice, even if it dies down relatively early.

Remember that most people in Japan will have a few drinks around food, and so the regular drinking spots will often be restaurants/izakayas!

Osaka Travel Blog: What to See and Do

You gotta check out Hozenji Yokocho, just because it’s so cool!

The historic Osaka-jō is a castle with an 8th floor observation deck that offers the best all-angle view of the city.

The doughnut-shaped Umeda Sky Building has an aerial view of Osaka that is obstruction-free.

Overflowing with shopping arcades and restaurants, Dotonbori is often depicted as symbol of Osaka in movie scenes.

Sumiyoshi Taisha is one of the country’s oldest Shinto shrines. It embodies three gods that are believed to protect the nation and sea voyages. It is always better to decide on where to stay in Osaka after checking the connectivity to the places that you want to visit in the city.

Cycle Osaka offers you a chance to explore the city by giving you a guided tour on one of their bikes.

Since instant noodles originated from Osaka, it is only right that the Instant Ramen Museum offers a fun experience representative of the history of instant noodles.

The puppeteers’ skill at the National Bunraku Theatre will leave you in awe.

Get a glimpse of life under-water as you watch the marine life at Osaka Aquarium Kaiyukan.

Just like in most of Japan, it is not part of the culture to tip. In fact, some might even find it offensive if you offer a tip so it’s best to avoid doing so.

There aren’t any, really. Just like Japan in general, it’s an extremely safe place. It’s one of the safest places in the world. I don’t have any experience with anything illegal that may be encountered while in the city.

Don’t look for where to stay in Osaka in such places.