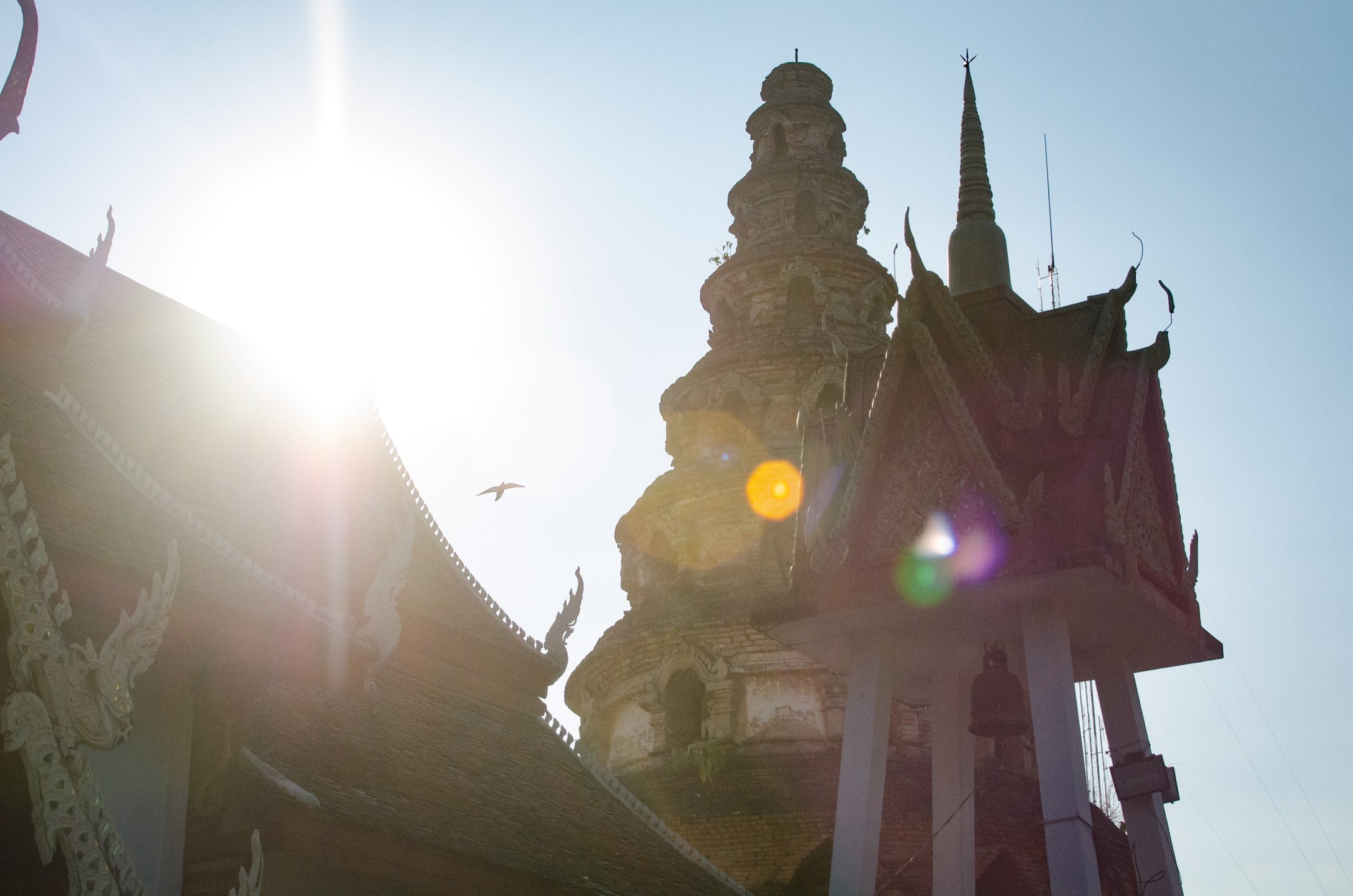 Where, How?
Chiang Mai on C&C
Best Time To Visit Chiang Mai
Personal Notes
Where to Sleep
Let’s Eat!
Let’s Go For a Drink
What to See and Do
Tipping in Chiang Mai
Common Scams & What to Avoid
C&C’s Google Map of the City

Chiang Mai Travel Blog: Where, How?

Airport Notes: It caters to local flights as well as international flights within the region, with the Bangkok route being its busiest. It is mainly serviced by Thai Airways though there are other flights during peak tourist season. In total, there are 16 airlines that service it.
Transportation to-and-from the airport: There are legal airport taxis and metered taxis that can be found at the exit on the north part of the terminal. There are public buses outside the airport though they are infrequent. Songthaews are available up to midnight after which you’d be lucky to stumble upon one dropping off passengers. Uber is a viable option.

Using a taxi is the safest option though inconvenient and expensive. As for local buses, B1 and B2, both white colored, are the most useful for visitors. In place of local buses, you may use a songthaew (pick-up trucks with two long benches seating at the back). Tuk-tuks are a fast but noisy way to get around. The motorbike on the other hand, is convenient and cheap especially for getting to outlying sights. Cycling is also a reasonable option since traffic isn’t as bad, street roads are flat and distances short. You may also opt for a car rental that you may find either at the airport or in the city center. The old city is compact and easy to walk around.

Don’t forget about songtaews, these pickup trucks that act as suburb transportation, more or less.

A Note on Taxis: You are better off with an Uber.

The walled city is Chiang Mai’s historical center. The Old City is only 1 square mile in size and is surrounded by the original city wall and a moat filled with water. Greater Chiang Mai is home to several tourist attractions including the most famous, Wat Phra That Doi Suthep. Lamphun is said to be Thailand’s oldest existing city. So is Nakhon Pathom. Lampang was a major teak trade center at the end of the 19th century.

Navigation tips: Downtown Chiang Mai is small and easy to navigate. It’s also rectangular, so when you’re away from the centre, try to remember where it is and on which side – north, south, east, west – you’re located and you’ll know where you are.

More About Thailand on C&C

Chiang Mai Travel Blog – This is a copyright free photo

Chiang Mai is a small city in northern Thailand that is a digital nomad hub. It is a must-visit destination for foodies who want to taste what northern Thai food is really like.

Tourists can find temples and historical figures downtown (within the walled city). Outside of this area, there are a lot of different bars, including the infamous Zoe In Yellow Bar.  The road that circles the downtown area has some of the best street food in the world after sundown, including offerings from several famous places. There is the Chiangmai Night Bazaar, as well.

After drinking too much at Zoe In Yellow one night, my friends and I found a bar where there was a cover band playing heavy metal songs from Metallica, Guns ‘N Roses, Black Sabbath, and Nirvana.  We ended up spending way too much time and money drinking and singing along with the band. It was a very liberating night!

In Chiang Mai, unlike in most cities in Thailand, you can score extremely cheap lodging (though not all cheap places may be as nice).

Within the four ancient walls of the Old City is where the action is. It is favored by visitors because of its abundance of guest houses, restaurants and hotels. It is home to most popular temples and the equally as popular Sunday market. Hug Bed and Breakfast offers a nice dorm room setting at a budget and so does Dozy House. The latter has a private double room option as well.

There are also several accommodation options at the riverside with new options cropping up by the day. It houses a couple of nice cafes too.

Baan Boo Loo Village is my personal favorite. It is a must-stay if you want to experience living in a traditional Thai house built on stilts. It has a rustic feel yet is still comfortable and clean. 99 The Heritage Hotel and The Sila Boutique Bed & Breakfast are two other great choices for a mid-range hotel.

There aren’t many major chain hotels in Chiang Mai. The most well-known ones are Shangri-La Hotel Chiang Mai and Le Meridien Chiang Mai.

Chiang Mai Travel Blog – Crispy pork and handmade #noodles, with a bit of thick soy sauce at the bottom. And as many chillies as you want.

Our suggestions – Dishes and Restaurants

There are  dozens of spectacular street food stalls in Chiang Mai.

The most famous one is probably the cowboy hat lady. Another great street food stall? Mr KAI Restaurant.

Sit-down restaurants that are worth a stop include Labkai and Paak Dang.

During the time I spent in Chiang Mai, I mostly stopped and ate at street stalls where there already were locals eating, looked in their plates and had the same thing. I never regretted it. Do like I did!

Chiang Mai Travel Blog – This is a copyright free photo

What do the locals drink?

It is not illegal to carry an open drink in the streets in most places in Thailand. The only exception is the moat surrounding the Old City in Chiang Mai. Don’t be a douche, though. Be respectful and remember that people live there and don’t want stupid drunk foreigners screaming and breaking shit.

Well, Zoe in Yellow is a definite hotspot. It’s like a gigantic open-air club with different bars juxtaposed to the main area. It’s a wild-west type of place. Anything can happen. This means that you’ve got the freedom to do whatever you want, yet this means that other people – who are probably very drunk – also have that freedom. Visit it… but be careful.

Just outside the city walls to the east are Night Bazar and Loi Kroh. It is a bustling bar and restaurant street that has become an attraction on its own. (Watch out for bar girls and bar girl bars.)

The affluent Nimmanhemin area is popular amongst expats with its coffee shops, trendy boutiques and bars that play live music. It is also home to night clubs like Warm Up Café that is best visited with a bunch of friends. (Watch out for bar girls and bar girl bars.)

Chiang Mai Travel Blog: What to See and Do

A visit to Chiang Mai is incomplete without temple hopping around the confines of the Old City. Coincidentally, the most popular are found in the inner quarter.

Explore the city on a bicycle or in a boat in the moat if you are not up to walking. There is little traffic and you may alight wherever you want.

Retreat to the leafy jungles outside the Old City and check out Wat Umong, popular among photographers for its several scattered Buddha heads.

Watch the sunrise or sunset at the peaceful Wat Phra That Doi Suthep that overlooks Chiang Mai.

Chat with a monk about Buddhist lifestyle at one of the over 200 temples in and around the city.

Visit one of the Chiang Mai’s markets and shop for anything from souvenirs, handicrafts to the delicious food – whether day or night.

Choose between the mostly local Saturday Walking Street and the tourist-filled Sunday Night Market in the Old Town. There is also the Night Bazar open every day.

Take a photo with the super-friendly Ladyboy Cabaret which is like no other show in Thailand.

Stop by Catmosphere, a cat café with a space theme before heading out into the night market.

Meditate at one of the yoga studios or take a retreat out of town for a day of week in the meditation capital of Thailand.

Just like in most of Asia, no tip is expected but it is always a nice gesture, especially since workers have relatively low wages. If you decide to tip, 7-10% of the total cost of the bill is normal.

Chiang Mai is a very laid back place, but all of the regular warnings for most of Southeast Asia apply. Be careful if you take a tuk-tuk or mototaxi, know where you are going, have a GPS, and don’t flash jewelry. Negotiate transportation prices and have exact change. If you leave Chiangmai by bus, shop around for the best price to your destination, as travel agencies have different prices for the exact same service. There is a large expat community which can be a great resource to ask questions or gather information via Facebook groups.

Most crime revolves around three things: jewelry, drinks and transportation.

The old jewelry scam is simple and is the same across Southeast Asia. You get into a cab/tuk tuk asking to go somewhere. Instead you end up in a jewelry/precious stones/knick knack store. They then proceed to fleece you.

You’re drunk? You might get mugged. Or bar girls might try to seduce you, then proceed to pick your pockets. Or the taxi driver might charge you 10x the actual fare. It can happen while you’re sober, of course, but it’s much more likely to happen in the dead of night. Which leads us to the next point…

…Travel agencies will try to sell you expensive bus tickets. Taxi drivers might try to take you to a different hotel if you don’t already have a reservation. They might try to sell you tours to neighboring villages or tourist “activities” like elephant riding or zipline adventures. They’re not scam per se, but you’ll get fleeced for sure!

The only problematic neighborhoods are the ones where Westerners party hard. There is a lot of petty crime, a large number of very drunk Westerners, and numerous security problems in the area near Zoe In Yellow. Do not get too drunk, don’t do anything you wouldn’t do at home, and be wary of tension in crowds.