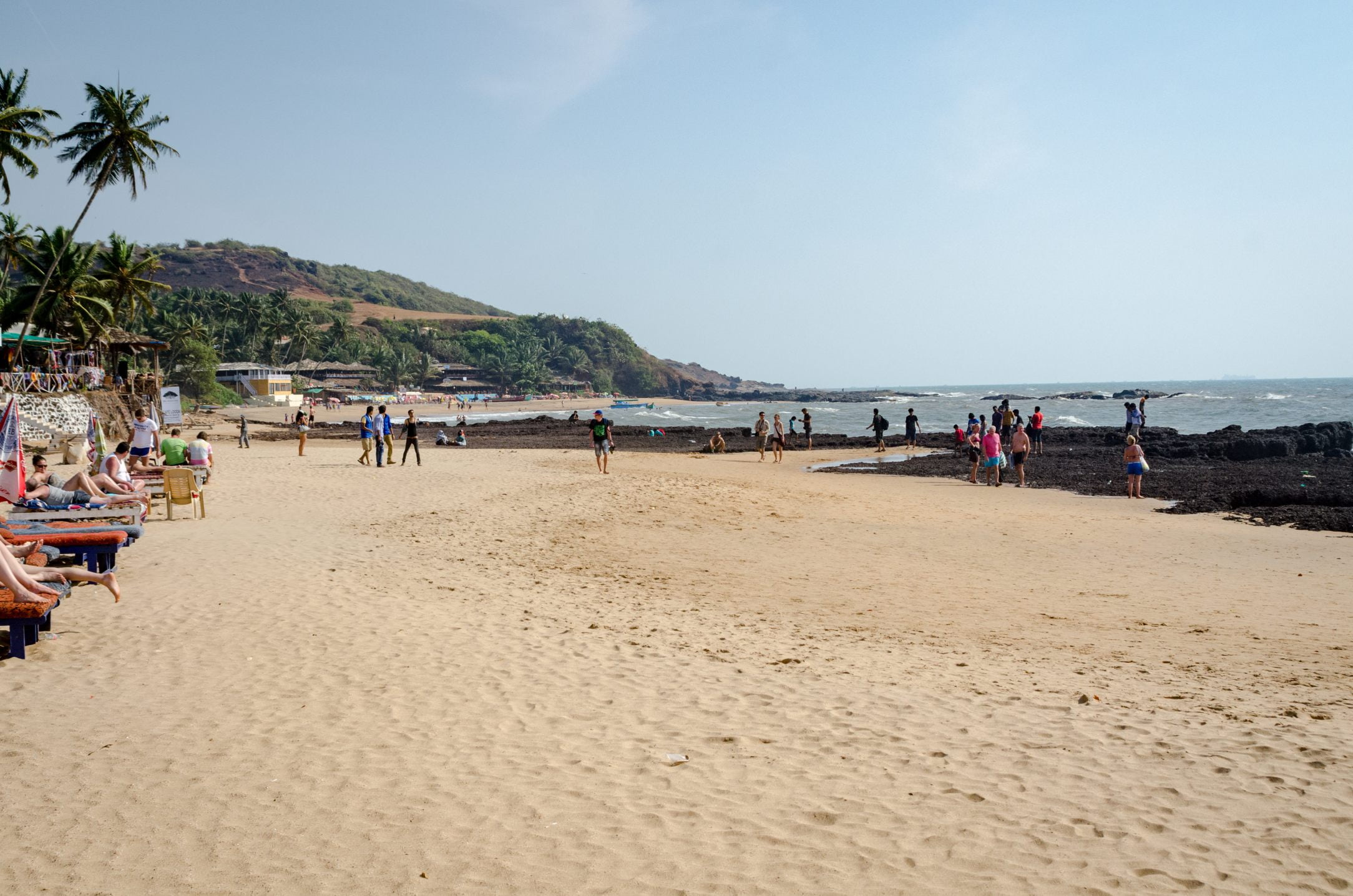 Where, How?
Goa on C&C
Best Time To Visit Goa
Personal Notes
Where to Stay in Goa
Let’s Eat!
Let’s Go For a Drink
What to See and Do
Tipping in Goa
Common Scams & What to Avoid
C&C’s Google Map of the City

Goa Travel Blog: Where, How?

Airport Notes: The Goa International Airport, situated in the city of Dabolim, is the only airport in the state of Goa. It is the ninth largest airport in all of India. It has one entrance, used by both tourists and military. The airport is closed for certain hours during the day. It has one terminal that handles both international and domestic flights.

Taxis are the most recommended form or transportation to and from the airport. There are local buses, however, they are not very frequent and often very crowded. Driving is another option, with rental cars available inside the terminal.

If you are looking to take the train, the Dabolim Railways Station is the nearest station to the airport, located approximately 5 kilometers away. Pre-paid taxis can also be requested at the airport. There are various transportation plans for the airport currently underway.

Other popular forms of paid transportation include un-metered taxis and auto rickshaws (three-wheelers). “Pilot Service,” or motorcycle rickshaws, are also available for those traveling solo. These services can be obtained for the entire day if needed, however, you will need to negotiate the price with the driver beforehand.

Women’s Taxi Service is the title for a fleet of taxi drivers exclusively reserved for female passengers and families. Pre-paid taxis and rental cars are available in Goa. Ola, Uber, Zoomcar are some of the more affordable and easy to obtain options. Additionally, there is a ferry service available in Goa for those looking to travel on the water.

Taking a taxi in Goa is pretty much the same everywhere in the country, would they be a car or an autorickshaw: use your GPS to evaluate the distance you’re travelling, decide on a price you’re willing to pay, negotiate with the driver before getting in, and have exact change. That way, you’ll get to your destination faster and you wont have to argue with the driver if he decides to make a few detours, because the price has already been fixed.

The ocean is west. Remember where the ocean is and you’ll know in which direction you’re headed.

Palolem Beach is located in South Goa. It is the most visited beach in the area.

Other popular beaches nearby include Colva, Calangute, Baga, and Anjuna.

More About Goa on C&C

Goa is a beach paradise. It’s the most laid-back province of all of India. It’s also a place where a lot of (expat) hippies live. “Goa Trance” has become a style of music because of the popularity of the electronic music dance parties on the beaches of Goa. Even though this popularity has somewhat subsided, it’s still a great place to find electronic music parties (and plenty of hard drugs).

Other than the beach parties, Goa is still a vacation destination for all sorts of people. Indians of all walks of life love to go to Goa to relax. Cold beer, cheap food, cheap accommodation, riding around on a motorbike at tropical temperatures, and a laid-back attitude with a few great options where to stay in Goa. What’s not to love?

One of the most entertaining moments of my visit to Goa is when I visited a club that offered a free open bar and free entrance to all women, each Wednesday. I’m sure you can imagine how that went.

What should I expect from Goa: Goa Travel Blog Beach: It’s a Catholic Part of India!

Goa Travel Blog: Where to Stay in Goa

Don’t expect the hostels where to stay in Goa to be extremely modern and clean; it is a less well-developed city after all.  Having said that, Happy Panda Hostel, #Hashtag Rooms and Folklore Hostel Goa are good hostels if you’re on a budget.

Since this is a larger province, well-rated hotels where to stay in Goa are scattered around the coast, so it really depends on your preference which exact area you’d like to stay in. Seashell Villas The Villa Resort and Resort Coqueiral are both great hotels that are comfortable, clean, and provide good service.

Also, when looking where to stay in Goa, consider Anahata Retreat, it gives you a full beach getaway experience, where you can stay in huts overnight by the sea.

Other great options where to stay in Goa are Patnem Dwarka and The Sovva Hotel.

Obviously there are also the usual chain hotels where to stay in Goa, such as Park Hyatt Goa Resort and Spa, Goa Marriott Resort & Spa and Le Méridien Goa.

Just like everywhere, Airbnb is a very interesting option. If you’re not already a  member, you can use this Airbnb link to get $40 off your first reservation and find a great place where to stay in Goa.

What should I expect from Goa: Things to do in Goa Beach: Spices at the Market

Street food is also delicious in Goa. Don’t be afraid to try some authentic cuisine sold by street vendors throughout the region.

Our Suggestions – Dishes and Restaurants:

Goan cuisine is a mixture of South Indian and Catholic influence. The state is well-known for its cashews and spices. The infusion of rice, seafood, coconut, vegetables, meats, pork cuts, and local all combine to make their local dishes memorable and delicious.

Still considered one of the best restaurants in Goa is a Greek place called Thalassa.

This is another destination where I’ve mostly enjoyed eating at small, street-food-style eateries and just getting what everybody got. There are many small restaurants, especially in Vagator, that serve a great vidaloo. Indian Red Chillie is a great example!

There also are many, many restaurants serving bad “Western food”. I don’t know why. My tip? Avoid them like the plague.

There might be one strange exception to this rule: I actually (relatively) enjoyed Sakana Japanese Cuisine.

Goa Travel Blog – Must See Places in Goa: The Food

Goa Travel Blog – What Do the Locals Drink?

Fani is one of the most popular drinks in Goa. It is a liquor is made from cashew apples. It is produced in Goa and not sold outside of the state.

Kingfisher is the best-selling brand of beer in India.

Drinking alcohol in public is generally just not viewed as socially acceptable in the state of Goa. As of late 2017, the government is working to issue a complete ban on drinking liquor in public spaces.

Goa has a special tax-free status on spirits, and many of the local bars take advantage of this. In general, beer, wine, and cocktails are easily available and inexpensive, including imported liquors. Goa is known for its nightlife and is considered one the most socially enjoyable states in the country. Drugs and alcohol are not difficult to obtain. The city comes alive in the night time.

I think Tito’s Lane – a little street full of clubs and bars – is fun, but it’s clearly a bit of a dodgy place. Advice: Avoid this place when looking where to stay in Goa.

Goa Travel Blog: What to see and do

Goa is one of India’s best-known tourist destinations. Even though Goa’s beautiful beaches often steal the headlines, the city has an assortment of other top-rated attractions to offer visiting tourists as well. But lacks of a lot of places where to stay in Goa.

The Beaches of Goa are divided into two sections. The northern beaches are considered more touristy and commercialized. There is an abundance of mid-to-low budget lodging options available in this area. The southern beaches feature more luxurious accommodations, including some private beach areas. Keri Beach (aka Querim Beach), Mandrem, Morjim, and Siridao are highly recommended “secret” beach destinations.

Panaji, Old Goa, Margaon, Mapusa, and Calizz are the most prominent places to visit in Goa. The cities most historically significant destinations include three large churches. The Basilica of Bom Jesus, the Convent of St. Francis of Assisi, and Se Cathedral.

Chapora Fort and Fort Aguada are the two note-worthy landmarks in the northern part of Goa. The Japanese Garden, the Church of the Holy Spirit, and Fort Cabo De Rama are a few historical sites located in the southern sector of the city.

Goa is full of local markets and beach vendors looking to sell anything and everything under the sun. It is best to do your souvenir shopping in these areas. The city is famous for its different flavors of cashews, various spices, and other traditional Goan items. Mapusa and Anjuna are two of the most favored markets in Goa.

The Goa Carnival is a series of festivities that take place for several months celebrating the end of one year, and the beginning of a new. The tradition goes back to when the Portuguese first arrived in 1510. Colorful parades fill the city with music, dance, and performances engulf the streets. The Carnival is not celebrated anywhere else in India. Good Friday and The Feast of the Kings highlight some of the other religious festivals typical of the Goan tradition.

The city’s nightlife is remarkable, as the locals love to indulge and celebrate. With easy access to alcohol, the Goan nightlife experience can be quite unforgettable.

Just like in most of Asia, it is not expected to tip but it is a nice gesture. If you have received good service, you can tip 7-10% of the total cost of the bill.

There are plenty (plenty) of scams in Goa. Be careful. Don’t get too drunk or fucked up, this is when they like to pounce. Be aware of the presence of different gangs, including the Russian mafia. Be extra careful on Tito’s Lane.

Negotiate the fare before getting on.

Be careful on Tito’s Lane.