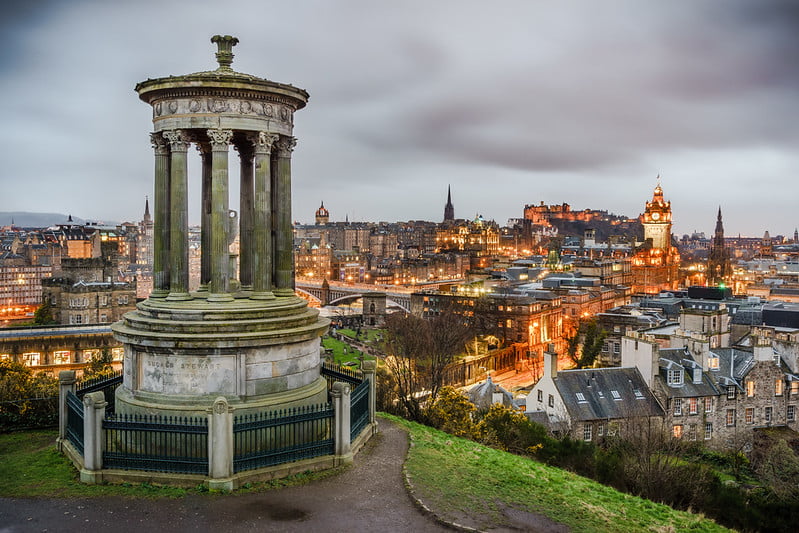 view of Edinburgh from Calton Hill - photo by Giuseppe Milo under CC BY 2.0

Edinburgh has a historic charm that photography enthusiasts can find hard to resist. But the Scottish capital is not just about picturesque historical sites. There are several lovely spots to explore in the Athens of the North and here are some of the Instagrammable places in Edinburgh:

McEwan Hall of the University of Edinburgh

The University of Edinburgh is home to this 19th century hall with a spectacular dome and Renaissance interior.

Also known as the High Kirk of Edinburgh, Saint Giles’ Cathedral is famous for its rich architecture and design. One look at its windows, porches, crown steeple, aisles, nave and transepts and it’s easy to understand why.

With a Post-Modern design, the Scottish Parliament Building makes an interesting sight. Curves and angles dominate the structure, and its interior is dominated by oak and granite.

With a history that dates back to the 11th century, Edinburgh Castle continues to dominate the skyline of the Scottish capital. There are several historical exhibits within the castle, as well as shops and cafes. You can also chance upon actors in costume wielding period weaponry.

A tower house built in the 16th century, Lauriston Castle is not only famous for its ghostly tales, but also for its old-world charm and divine gardens.

Holyrood Palace is a 17th century structure that is famed for its quadrangle layout. Its forecourt fountain is also an intriguing spectacle, along with the ruins of the Holyrood Abbey found within the palace grounds.

A UNESCO World Heritage Site, Calton Hill has neoclassical monuments for you to explore, including the Dugald Stewart Monument and National Monument.

Princess Street Gardens is home to several monuments and memorials. The East Gardens hosts a Christmas market during winter while the West Gardens is known for its air-raid shelters and The Gardener’s Cottage.

The Royal Botanic Garden in Edinburgh has a living collection and herbarium full of natural colour and beauty. Its Palm House, Caledonia Hall and the Inverleith House are not to be missed as well.

Prepare your camera as you roam around this outdoor art gallery and park in one. Jupiter Artland features the works of various prominent land and installation artists.

On Queen Street in Edinburgh, one can find the Scottish National Portrait Gallery. As its name suggests, it is dedicated to collections of portraits of Scots. The building of the gallery is made of red sandstone and follows a Gothic Revival style.

The Talbot Rice Gallery is not only famous for the works of art found within it, but also for its galleries that speak of 19th century splendour and contemporary magnetism.

Take a walk along Edinburgh’s Circus Lane and you will find yourself with beautiful photos. If you want to capture some gorgeous ambient lighting, it is best to visit early in the morning or late in the afternoon.

Visiting Dean Village is like traveling back to the 19th century. With the period houses and a soothing stream, it would not be a surprise if you end up with loads of pictures while in this neighbourhood. Also, make sure to check out Belford Mews and the colourful doorways of the redbrick houses there.

Victoria Street is popular among photography buffs due to its gentle curve, as well as its colourful storefronts.