SAGUENAY, Canada – The Québécois are true beer lovers. There are dozens of craft beer breweries in Quebec, there to prove that love of the brewsky. Quebec craft beer is important to every region in the province. In Saguenay, there’s some of the best, but least-known, beer in the country. Follow me, I’ll show you!

From Sainte-Anne-des-Monts (Yes, I know) through Quebec City (I was told that there is shorter way), I arrived at La Voie Maltée absolutely famished. My state of mind was perhaps slightly altered when we were offered the only two places available in the restaurant, at the bar. Having barely taken time to order a beer, I look up and try to understand the atmosphere.

If this place didn’t brew its own beer, I would guessed that I’d had landed in a generic sports bar: a huge dining room, giant flatscreen TVs everywhere, brick and brown woods for decoration and people who seem to be indulging in an after-work happy hour.

My beer now served, the 50-year-old lady by my side starts asking me all sorts of questions and talking about her recent divorce. Atmosphere-wise, this was probably a bad night.

But we are there for the beer. The Graincheuse is their most popular – a double Belgian – but on that day it wasn’t available on tap. So, I take a Brassière – Imperial IPA – that stands out for its bitterness.

It was good, strong, but not too much, obviously very hoppy, floral and tasty. Unfortunately, I have to say that this is the only beer on their menu that I enjoyed drinking. After trying all of their beers on tap, I can safely say that they were either ordinary or bland.

After an hour, the old hen on my right hand side fell silent and started shmearing lipstick on her lips, staring into her pocket mirror, for several minutes in a row.

It’s exactly at that moment that my meal arrives: their famous flank steak marinated in dark beer. The steak and fries are simply divine. The meat is tender and caramelized, the fries are rich and crispy. Awesome! My friend ordered the pulled pork sandwich: just as delicious. A microbrewery that impresses with its awesome food rather than its beer? Sure, why not!

Second stop: La Tour à Bières. Atmosphere? A group of international university students from UQAC drink pitchers opposite to a group of young people – very, very young people – that are having a meal and chatting. This setting allows us to really focus on the beer… because there’s nothing else going on.

Prognosis? None of their beers stand out. After my visit, I took the time to chat with a few beer snobs of the region. One of them pointed out that demand for la Tour à Bières’ beers became so great lately that he suspects that quality has gradually been substituted for quantity. It comes to speculation, of course. Moving on…

Last stop: Saint-Gédéon. After a wonderful day at the beach, and adjacent to the trailer park on the shores of the Lac-Saint-Jean, lies a large open-air foodie haven: a park, a brewpub, and a few restaurants. Awesome! This is La Microbrasserie du Lac-Saint-Jean, one of the most hyped breweries in the country.

Once seated, beneath a tall sun umbrella, a few families sitting next to us, a pretty waitress brings me my first beer of the evening: Turlutte.

And, finally, for the first time on my trip to Saguenay, I have an epiphany. It’s ecstacy. This beer has an beautiful flower-like aroma, a sweet and balanced malty taste, and a nitro foam. It’s an Irish Cream Ale a bit like Kilkenny, and is awfully refreshing. It has a bit more taste than Kilkenny, in the most pleasing way.

Oh, their beers are all very good! The Blanche de Grandmont, la Ruine-Babines… awesome, excellent! But I couldn’t help but order a second Turlutte. I must confess that I now regard it as the best in all of Canada. No kidding. 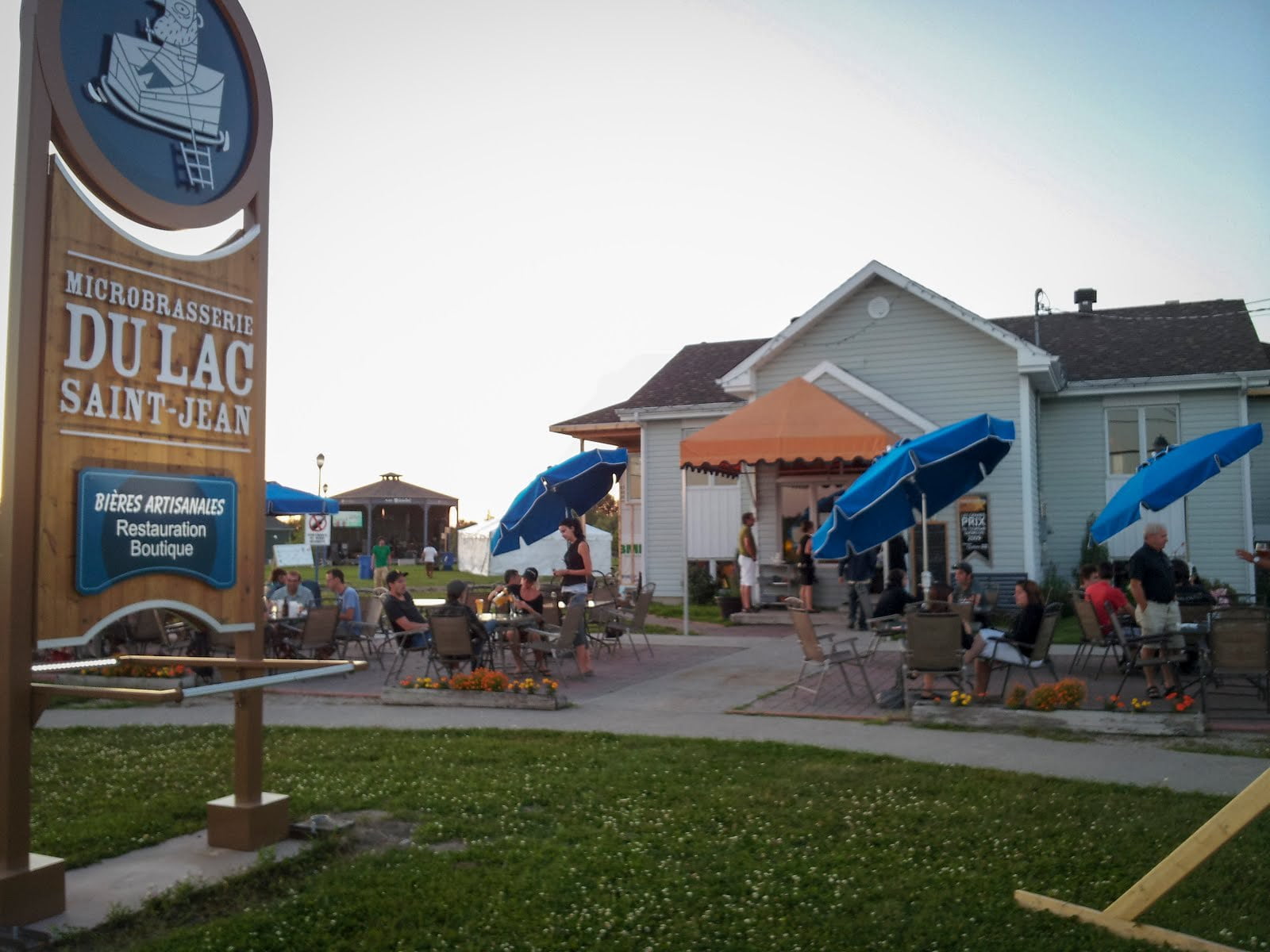