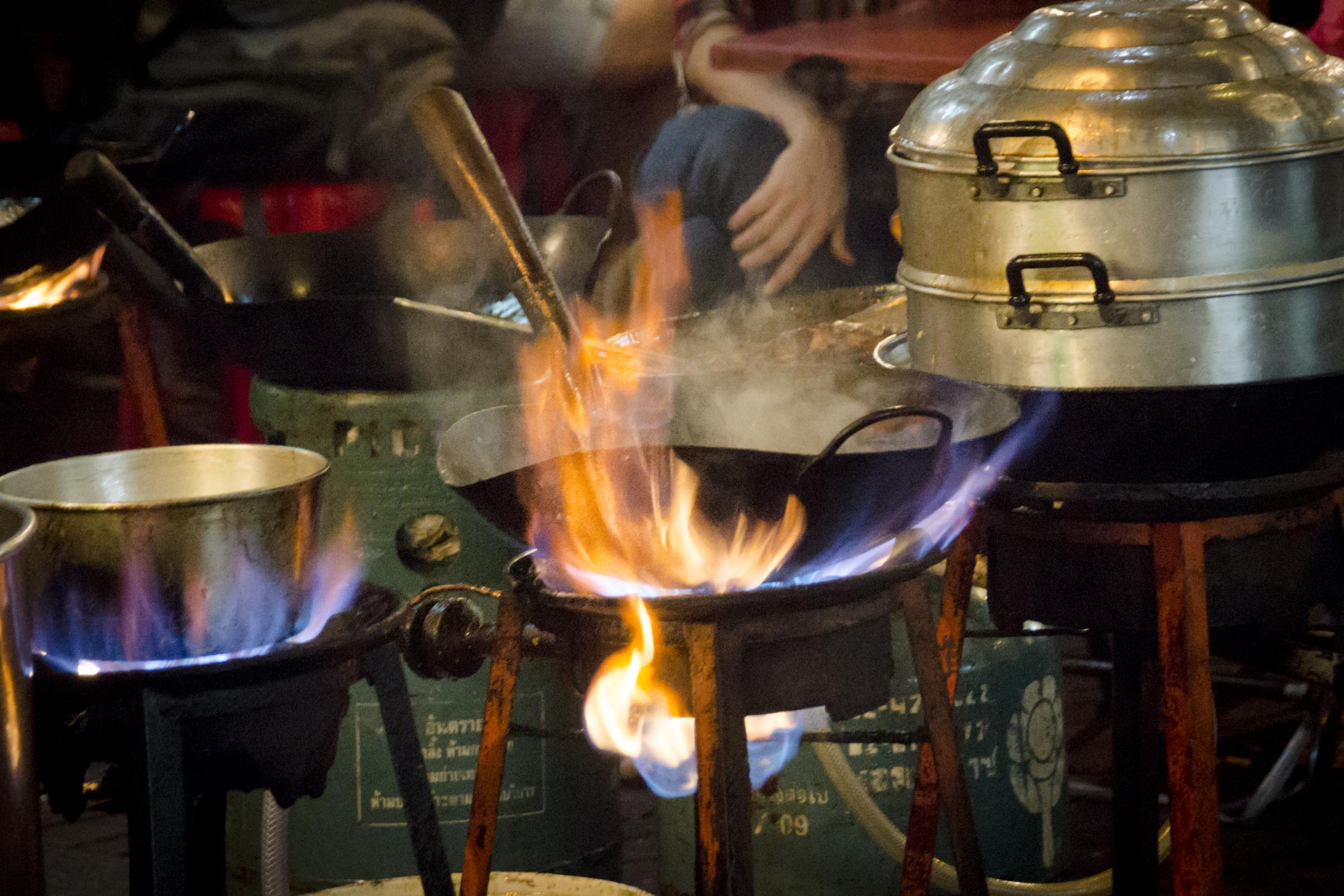 BANGKOK, Thailand – Bangkok Thai cuisine is on everyone’s lips. The proof: Nahm, chef David Thompson’s white tablecloth restaurant in Bangkok, was voted number one restaurant in all of Asia in late February 2014.

Has it always been that way?

And what makes Bangkok Thai cuisine so special?

Mostly, why has Bangkok Thai cuisine been left unchanged? Western culture pervades everywhere, but doesn’t seem to blend with Thai food. How come?

Bangkok Thai Cuisine: Why Even Ask?

Bangkok is Thailand’s metropolis, capital and hub. Everything “Thai” is gathered there and a stroll by Bangkok’s street food stalls is a serious sensory assault. The most faint of heart’s knees will buckle at the first sight of street food fare: it embodies everything they can’t stand. Strong smells and tastes; the use (although illegal) of sewage as a dump for some cooking liquids; deep-fried everything; charcoal grills with mystery meat on them; gas burners with woks roaring; tiny plastic chairs to sit on and brightly-coloured stools for tables; right on the street so car and tuk-tuk fumes add to the spices in your dish.

But street food is as democratic as it gets. People from all walks of life gather and eat.

Including chef David Thompson, now known as the best chef in Asia. His two books, Thai Food and Thai Street Food, are recognized in the Western world as bibles of the genre.

“[Traditional Thai food] is what was – and still is – offered in the home. It’s rice based, it’s shared, and it’s placed in the middle of the table.” As opposed to street food, which is “influenced by China: it’s noodle-based.”

Depending on where you go in Bangkok, you’ll find different types of street food. And while some of the dishes have strong Chinese influences, other dishes come from different parts of Thailand.

Note: Are you headed to Thailand? Check out these books to read while you’re there by TheTravelLeaf!

As chef Thompson and Dr Sunanta point out, the more traditional Thai dishes – mostly the curries – are harder to find on the street.

Dr. Sunanta is the author of The Globalization of Thai Cuisine, an academic paper published in 2005. In her work, she points out that while Bangkok Thai cuisine is recognizable and relatively unique, a lot of its influences trace back to other Asian countries:

“What is known as Thai food today is in fact a combination of indigenous foods and the influences of Indian and Chinese culinary traditions. In the 15th century, Khmer cooks introduced Indian food such as curries and boiled red and white sweets to Ayuttaya’s court. Fish sauce, which is a condiment and crucial ingredient in almost every Thai dish, is a Chinese invention. Earlier contact with Western cultures in the 17th century left a culinary legacy in Kanom Thong Yip, a Thai dessert modified from a French or Portuguese dish. Chilies were introduced by the Portuguese in the 16th century and in combination with fish sauce, galangal, and lime, they give a distinctive flavour to Thai dishes today.”

In other words, the surrounding countries have had influences in the formation of the Thai identity. However it is, today, jealously guarded from outside influences. How come?

“Thailand has never been formally colonized by Western states and this explains the lack of easily recognizable traces of Western influences on Thai food,” clarifies Dr. Sunanta.

Furthermore, the Thai government has now implemented a national food strategy, called “Kitchen of the World”. According to the Bangkok Post, the program “aims to develop the country’s food industry. Ambitious goals include putting Thailand among the world’s top five major exporters of food, promoting the use of Thai ingredients and condiments to produce authentic Bangkok Thai cuisine, and to increase the number of Thai restaurants worldwide.”

Of course, this will cement Bangkok Thai cuisine in the hearts of Thais, and influence will become even harder to come by. And, unsurprisingly, this is what happened to chef Thompson, who got in trouble for stating that he was cooking traditional Thai food.

Bangkok Thai Cuisine: Yours Or Ours

A food writer by the name of Suthon Sukphisit is quoted by the New York Times as saying “If you start telling Thais how to cook real Thai food, that’s unacceptable,” in reference to chef Thompson. “He is slapping the faces of Thai people!”

After all, he is recognized as the best chef of Bangkok Thai cuisine, and he’s not Thai. Since this outcry, chef Thompson is careful when he talks about his craft. “[My food is] pretty traditional, but I’ve got myself in trouble for saying that a few times. I’m pretty faithful to old recipes. I don’t have the ease of someone who’s been born in that food culture, so hopefully I’m more faithful to the recipes as other Thai chefs. I don’t have the flexibility.”

Note: Yes, I admit, to me, Thailand is all about food. But there are plenty of awesome things to do as well! Wanna know more about the country’s famous ladyboys? Check out this post by thegayglobetrotter.com!

A chef being apologetic for being the best in his field is rather strange, but restaurateur Jarrett Wrisley, responsible for two restaurants in Bangkok – Soul Food Mahanakorn, a “Thai fusion restaurant,” and Appia, an Italian eatery – knows how chef Thompson feels. According to him, Westerners will keep flocking to Bangkok to try their hand at cooking Thai food. Wrisley says that Westerners are looking for the freedom that’s lost back home. “I think it’s a cultural problem, he says. In the States, a restaurant would be in real trouble if authorities knew that fish is fermenting in the walk-in. […] But Thai street food is as safe as the food in any New York restaurant. [In Bangkok], there’s a freedom that’s been lost in the West.”

“Westerners are passionate about Thai food, it is not surprising some become excellent Thai chefs,” adds Dr. Sunanta. Considering Thai food writers like Sukphisit safeguard the authenticity of their food so aggressively, it is easy to see that Thai food will not be influenced by American or European tastes any time soon.